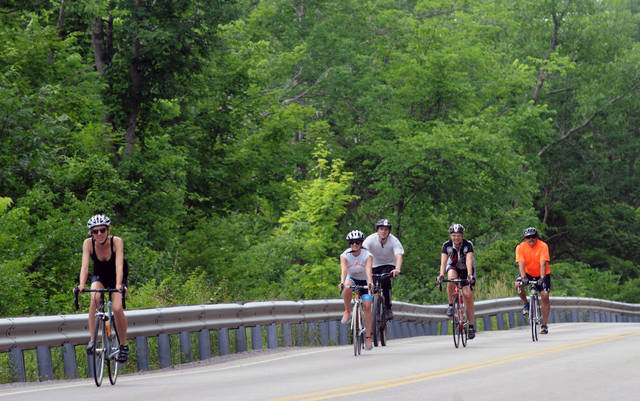 Cyclists make their way down Kentucky 8 in Maysville as part of the Zach Ruble Memorial Ride in this file photo. –

The 10th annual Limestone Cycling Tour will be Sept.15, beginning in Maysville, organizers said this week.

The Maysville leg of the tour began in June 2009 as a ‘Ride To Remember’ cycling tour of Mason County back roads as a memorial to Zach Ruble. Ruble was a 2008 Mason County High School graduate and University of Utah student who died unexpectedly. Classmate and friend Kyle Pitakis thought a group bicycle ride would be a fitting tribute to his friend, who was an Eagle Scout, avid cyclist and outdoorsman.

For more information on the Kentucky Century/Cycling Challenge visit its website at: http://www.kycyclingchallenges.com/.

Once again there will be four supported routes offered including a 25 and 40-mile loop, a 62 mile – Metric Century and a challenging 100 mile – Century. All four routes will begin at Limestone Landing in downtown Maysville traveling west on Kentucky 8 along the Ohio River. Cyclists will be guided by route markings, use phone apps for map guidance, and have rest stops along the way. The Century route travels through Minerva, Augusta, Germantown, Old Washington, May’s Lick and Orangeburg before returning to downtown Maysville after climbing nearly 6,100 feet during the route. All four routes can be viewed on the website: www.limestonecyclingtour.com.

The name of the ride has changed with the ride growing each year, but the cause remains the same. Proceeds raised after expenses are donated to the Zachary Ruble Memorial Scholarship Fund administered by the Hayswood Foundation in Maysville, where MCHS seniors can apply for a renewable four-year partial scholarship.

Motorists should watch for extra cyclists on Sept. 15 and be cautious every day giving them 3 feet or more space while passing in a safe zone. It is the law in Kentucky. Pet owners along the routes posted on the website are asked to please keep them restrained on ride day to assist in a safer environment.

On ride day, the community is invited to welcome back the cyclists at Limestone Landing while listening to some local musicians from about 2–6 p.m.

Cyclists make their way down Kentucky 8 in Maysville as part of the Zach Ruble Memorial Ride in this file photo.