Cycling & the city: Panjim gets on track

A new plan to provide cyclists with a dedicated lane is being tried out in the city as a pilot experiment on every subsequent Sunday till October 25. This will also test the spirit of Panjimites as well other cyclists and indicate whether cycling as a regular form of transpiration can indeed be feasible 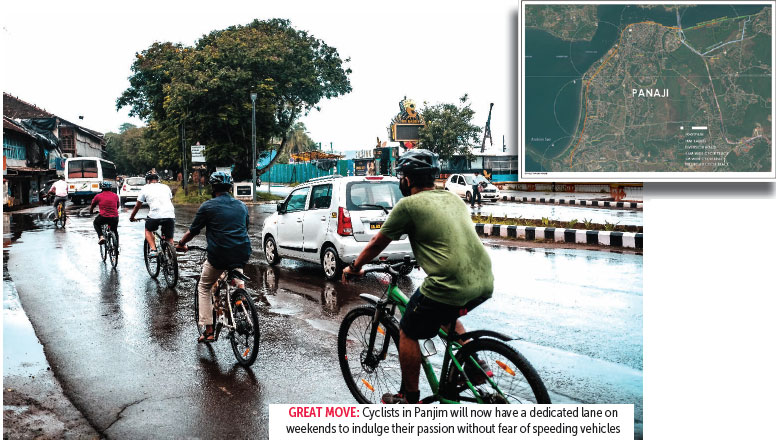 In an effort to help the residents of Panjim retain their physical fitness, residents will have a 9.6 km track for cycling.

The track will stretch from Dona Paulo circle to Pato at Ribandar. There are plans to place

pop up cones earmarking part of the road for cyclists between 8-11 am.  This will commence on October 2 and will be done on every subsequent  Sunday till Oct 25. After that, a call will be taken after assessing the response. The organizers have been working with the traffic police to ensure everything moves along smoothly.The Cycles4Change challenge is an initiative of the Smart Cities Mission, Ministry of Housing and Urban Affairs.As a precursor to Panjim’s participation in the Cycles4Change challenge an exercise was conducted to assess physical infrastructure and traffic behaviour in the city so that pain-points hindering the uptake of cycling in the city could be identified and documented.One of the key observations was the fear of being hit by fast-moving vehicles due to the lack of dedicated/ demarcated cycling lanes. This is especially true for the approach road to the NIO circle, which is at an incline and has a single lane for vehicles. Due to this cyclists have to often navigate between a slow and strenuous ascent, while ensuring that they steer clear of passing vehicles. Additionally, the presence of several unmanned traffic junctions along DayanandBandodkar Marg and Dr Jack de Sequeira Road was also perceived as being unsafe for cycling.The survey team also identified the lack of bicycle parking infrastructure, such as racks where bicycles could be securely attached, as one of the barriers in the uptake of cycling at a larger scale. The survey team also encountered stray cattle on the roadThe move has evoked positive responses from avid cyclists and other stakeholders “Its awesome to have an initiative like this which will benefit the younger new riders and maybe encourage family cycling too. The downside is that the govt. has been promising this for ages and was even supposed to be included when the Dona Paula to Miramar was being done but was dropped at the last minute. So this is no new concept. So fingers crossed on this initiative” said Bryan Soares, Architect and Cyclist Rajesh Malhotra, a cycling entrepreneur  said “The cycling lane initiate is timely since a lot of interest is generated among the youth with regards to cycling and its benefits. During the lockdown, Germany, Britain and most developed counties have expanded their network of cycling lanes to cut use of public transport. With more people travelling around the world the Indian mindset of the cycle being a poor man’s transport has changed drastically. We hope that cycling lanes become a permanent feature in Goa”. It is felt that being compact in nature, Panjim has the scope to adopt cycling as a mode of travel in the interest of moving towards a more sustainable way of living.This could perhaps be a pointer to the route the city could take to sort its problems out and to make it a pleasure for residents living in it.