Standing desks are rapidly gaining in popularity as concern grows about the health impacts of spending long periods sitting down. Apple CEO Tim Cook has even described sitting as ‘the new cancer,’ with all Apple Park employees getting height-adjustable sit-stand desks.

We’ve reviewed a few different products, from full-on sit-stand desks to a simple conversion option for laptop users. Flexispot has gone one step further with a couple of its products, however, combining a desk with an exercise cycle …

One option is the Deskcise Pro V9U. This is designed for people who already have a standing desk, or an adjustable sit-stand one. It’s a slimline exercise bike on wheels that you can use with a desk in the standing position.

Overall, the V9 looks very similar to a conventional home exercise bike. There’s a wide padded saddle to sit on, platform pedals and an LCD data panel able to display things like speed, distance and calories burned. The V9 is mostly made of plastic, with metal downtubes, and is available in black or white.

Handily, it has four castor wheels on folding arms that make it a cinch to wheel around an apartment. The folding arms are particularly handy if you need to fit through a narrow gap.

But the unique feature of the V9 is that, instead of handlebars, there’s a large plastic desk. This is intended to hold a laptop or tablet, and is more than big enough for a 15-inch MacBook Pro.

Flexispot claims that it comes almost entirely assembled and takes just one minute to prepare for use. That may be a slight exaggeration, but it’s certainly true that it’s extremely quick and easy.

Once you’ve removed it from the packaging, you simply place the desk piece into the slot on the bike, fasten a single bolt, unfold the pedals and unfold the arms with the wheels. At that point, it’s fully assembled, and all that remains is to adjust the height and desk position to suit. I was comfortably ready to use it in less than five minutes.

For someone my height – 5’9″ – I found that there was plenty of adjustability. Both saddle and desk lift easily up and down, and the desk also slides smoothly back and forward, locking into the desired position. However, I was using almost the maximum height adjustment on the desk, so do wonder how suitable it might be for someone significantly taller.

There are effectively four ways you can use the V9, so let’s look at each in turn …

As a standard exercise bike

The Flexispot has everything you’d expect from a standard exercise bike. The pedal resistance – which is magnetic – can be adjusted in 8 steps. As a regular cyclist, but one who uses a bike mostly for city transport rather than long-distance rides, I found that level 6 provided an easy level for use while working, 7 gave more of a workout and I had no desire to go any higher than 8. At the lower levels, there’s very little resistance, so I think it would also be suitable for those completely new to cycling.

There’s a standard exercise computer built in. This is just a greyscale LCD screen and no connected features, but it displays time, speed, distance, calories and revolutions-per-minute. There’s also a cupholder for a water bottle to keep you hydrated as you cycle.

One drawback of the desk design is that the data panel can’t be viewed with the desk in use. If you’re using it purely as an exercise bike, then you can slide the desk forward out of the way and see the panel while you’re cycling, but it’s still not a particularly convenient position. It would have been better to build the display into the edge of the desk, but that would have made for a more complex – and more expensive – design. 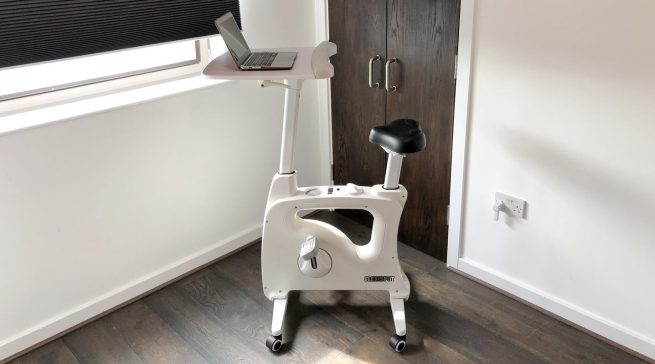 As a desk cycle

I’m showing it here with an 11-inch MacBook Air, but the desk is plenty large enough for a 15-inch MacBook Pro, and the wristpad at the front edge makes it comfortable to use. The upright design of the bike means that there’s no weight on your wrists, so typing is comfortable, and the unit feels solid.

However, the cycling motion does mean that there’s some rocking motion. That does make typing a little more challenging than usual. It’s not impossible to type away at a reduced speed, but I’d say that the desk is more suitable for mixed work than writing a novel.

As a standing desk

If you hop off the bike and simply stand facing the front of it, you now have a standing desk – albeit without the wristpad. I did need to reduce the height of the desk for this, so it’s not instant to switch between cycling and standing modes, but there is plenty of height adjustment available.

Again, in this mode, the desk is plenty big enough for a 15-inch MacBook Pro.

As a ‘Netflix and cycle’ device

In addition to using it to work, the V9 also works well for leisure use – watching something on Netflix while getting some exercise, for example.

In this mode, I either let my arms hang at my side, or rested them on the desk. Putting the display in calorie mode lets you see whether you can balance out the popcorn intake with exercise …

Regular exercise bikes vary tremendously in quality and price, so it’s hard to assign a direct equivalent. There are budget models starting at less than a hundred bucks, but in general, bikes with broadly similar designs, magnetic resistance and displays seem to go for somewhere in the $200-300 range, so you’re paying around $100-200 more for the desk function.

Given that you’re getting a lot more functionality out of it, I’d say this makes it decent value.

Living in a relatively small city-center apartment, space is always a consideration. My initial expectation was that I wouldn’t want to keep is, as we simply don’t have room given that it can’t replace my desk, which uses a monitor alongside the MacBook Pro.

But I must say that it’s a very painless way to exercise, and so far at least, I’m keeping it in my office. If you’re more of a walker or runner, check out the treadmill in the video below.

Flexispot is available in a choice of black and white. The desk version costs $399.99, while the model designed for use with an existing standing desk costs $299.99. Both are available from Amazon.

Check out 9to5Mac on YouTube for more Apple news: