Home FITNESS Fitzgerald resident hula hoops for fitness, bringing the community along with her

King, a 29-year veteran of the Henry Ford Health System where she coordinates special projects, first brought her love of hooping to others a decade ago as part of a “recess at work” program.

And people liked it so much, she decided to bring a whole “hula hoop troupe” out to the Metro Detroit Heart and Stroke walk in 2011, along with bubbles, music, and her infectious laugh. The walkers jumped in to try it out and enjoyed it so much that King’s hula hoop troupe has been invited back to the walk every year.

In the past several months, King has brought her hula hoop (and bubbles) to the Market on the Ave in Detroit’s Live 6 neighborhood on Saturdays, where she actively looks to engage the local community and get them hooping.

“I teach people to hula hoop, and it’s so exciting for them,” says King. “So many people come up to me saying, ‘Wow, I’d like to, but I can’t.’ ” King usually proves them wrong. 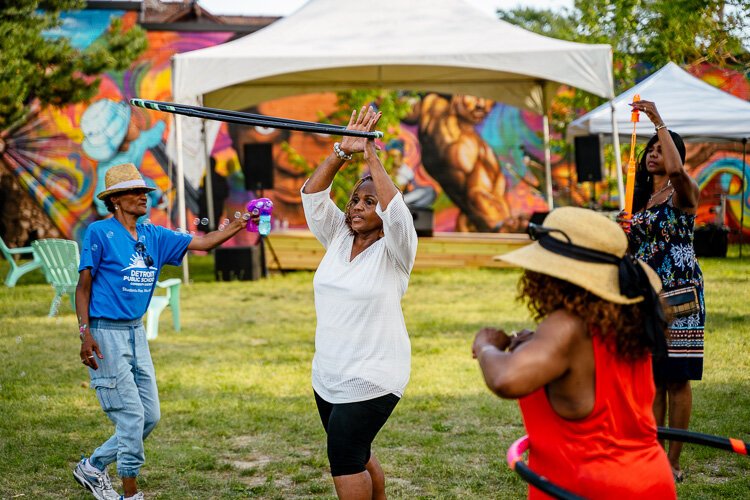 King received a grant this year from the city’s Civic Commons Community Catalyst (C4) Program to make and distribute hula hoops to the community. To manufacture the hoops, she follows instructions on YouTube and adds her own special design.

When she and the troupe go out, King carries a range of hoop sizes with her to accommodate everyone’s body type. Most everyone can hula hoop, she says, but getting the right size hoop makes a huge difference. It’s important for those wishing to try the sport to be fitted correctly, which, she says, is a matter of trial and error.

And although it may seem like a bit like a lark, King is quick to point out that there are real fitness benefits to hula hooping.

Jevona Watson, owner of Detroit Sip coffee shop on Livernois, is one of King’s hooping troupers. She began hooping two years ago after she saw how fit King had become.

“I hadn’t seen her in a year or two. One day, she walks into my coffee shop and I said, ‘How did you lose all of that weight?’ She told me that she’d been hula hooping. So I said, ‘Well, you’re not gonna do it without me. I’m joining you!’ And that was it. We just started hula hooping.”

Watson can now hula hoop for up to an hour uninterrupted. And all of that hooping has made a big difference in her fitness level.

“She has lost weight and she looks so good,” says King. “She’s the perfect example of the benefits of hula hooping. She has trimmed down her whole body.”

Watson also appreciates hula hooping as a form of exercise that is enjoyable and doesn’t cause injury.

“It helps me work my core without the pain and the anguish of a situp,” she says. “It helps me burn calories and target areas without the wear and tear on my body. It’s fun fitness. That’s how I look at it.” 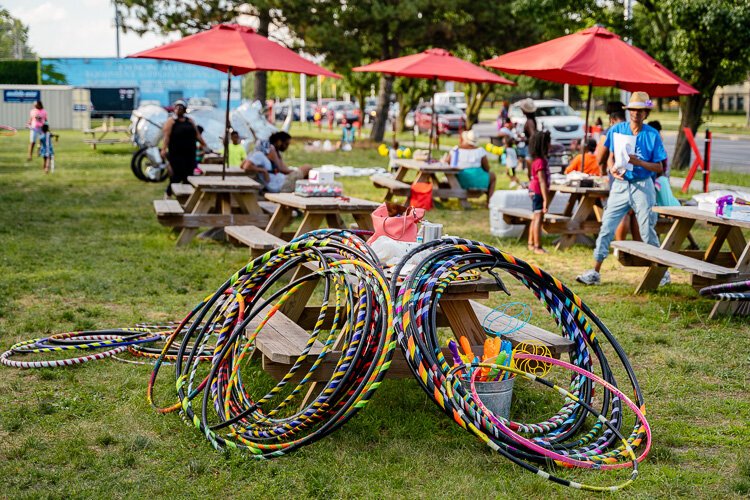 King especially loves bringing hula hooping to young people in the community, something she has been able to do at the new Ella Fitzgerald Park that opened late last summer in the Fitzgerald neighborhood, where she’s lived since 1993.

“What was so exciting when the park opened, on opening day, I had my hula hoops out, and it was a hit,” says King. “Now that we have a park, I go up there and hula hoop and the kids come around and want to try it.”

While she loved sharing her hula hoop with the kids, she didn’t love getting her workout interrupted. When she realized there weren’t enough hoops to go around, she set about making more. So when the C4 grant opportunity came around, King jumped at the opportunity.

Having the kids involved makes hula hooping even more fun, and meaningful for King.

“When they come around, they always like to compete with us,” she says. “We have little competitions. They show me tricks. They are so excited that they will have an opportunity to have their own hula hoop.”

She’s also seen hula hooping have a positive impact on the dynamic among kids in the park.

“A few of the more aggressive children, they kind of let their guard down, and through hula hooping they display leadership qualities,’ says King. “Once they started hula hooping, it wasn’t about being the best or the biggest, but it was about showing what they could do and even showing the other kids how to do it.”

While bringing hula hoops to kids in a park may seem like a small thing, Watson sees the potential for a substantial community development impact.

“Bernadette really does want people to experience the joy of it, the camaraderie and the sense of community,” says Watson. “When we are at the park, she uses that as an opportunity to encourage the kids to keep the park clean. She brings trash bags and picks up trash while she’s hula hooping, and encourages kids to do the same thing, to take pride in their neighborhood.” 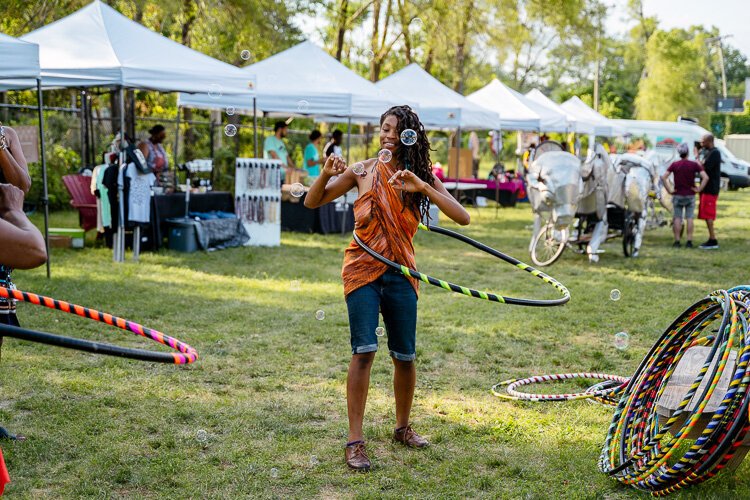 Watson sees hula hooping as a perfect opportunity to bring people together across generations, and even across economic and political divides.

“Hula hooping is a perfect opportunity for mentorship because we can learn something from the younger ones and they can learn something from us,” she says. “Now more than ever, we have to outnumber the things that are going on with hatred and racism and ‘I got more money than you and I have more education’. How much money you have or what race you are, what gender you are, what religion, it doesn’t matter. Everybody likes to have fun out there. People want to be happy.”