Olympia Fields, Ill. – Ben Smith fired a 1-under-par 69 Sunday, while Tyler Strafaci and Noah Norton each shot even-par 70 as No. 3 Georgia Tech held on to claim a share of the championship of the Olympia Fields Country Club/Fighting Illini Invitational.

It is the 12th tournament championship in the last two-plus years for the Yellow Jackets and its senior class of Strafaci, Andy Ogletree and Luke Schniederjans. It is victory No. 61 in the 24-plus-year tenure of head coach Bruce Heppler and the 92nd in program history, dating back to the advent of stroke-play competition in college golf in the early 1980s.

TECH LINEUP – Smith, a redshirt freshman from Novi, Mich., paced the Yellow Jackets on this day. He recorded four birdies in a six-hole stretch during the middle of his round to help the Jackets come from a stroke behind to four ahead early on the back nine. He posted his best career finish, a tie for 14th place, at 3-over-par 213. 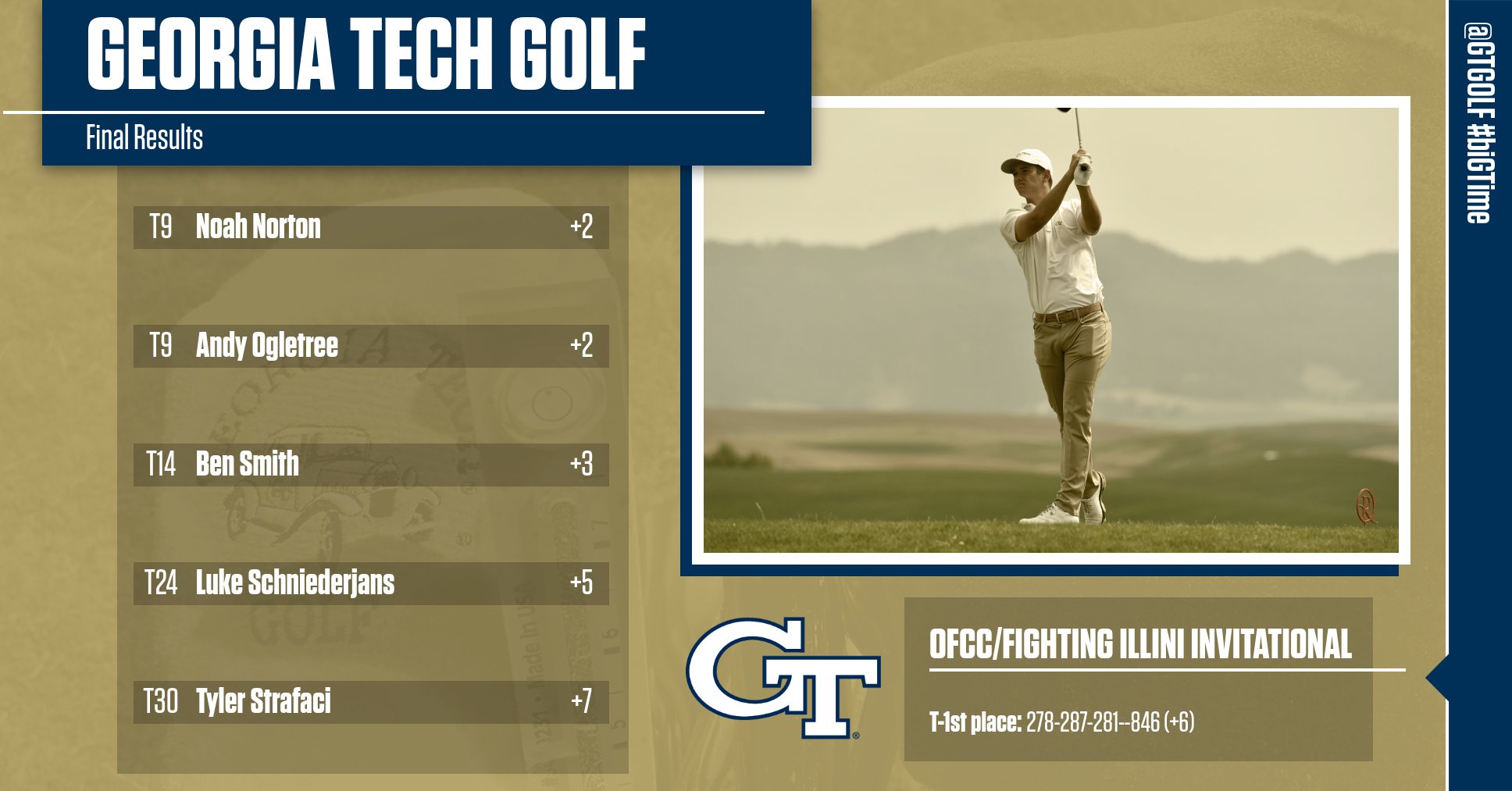 Tech used a hot stretch early on the back nine, with eight birdies and no bogeys between the 10th and 16th holes, to forge a four-shot lead over the Bears. Both teams, however, stumbled at the end, with the Jackets recording four bogeys and two double bogeys on the last two holes. The Bears were not able to capitalize, unable to post a birdie while recording three bogeys and a double bogey.

INDIVIDUAL LEADERBOARD – Baylor’s Cooper Dossey tried to carry the Bears to the team title, playing the first 16 holes at 5-under-par Sunday, but he double bogeyed 17 and bogeyed 18 to finish with a 2-under-par 68. It was good enough to win medalist honors with a 54-hole total of 207 (-3), two shots ahead of Florida’s John Axelsen, who carded a 67 Sunday and finished at 209 (-1).

Jack Trent of UNLV, Sahith Theegala of Pepperdine and Jamie Li of Florida State tied for fourth at even-par 210, with North Carolina’s Austin Hitt and Baylor’s Corey Kober tied for seventh at 211 (+1).

Norton and Ogletree were among five players finishing at 212 (+2), tied for ninth. 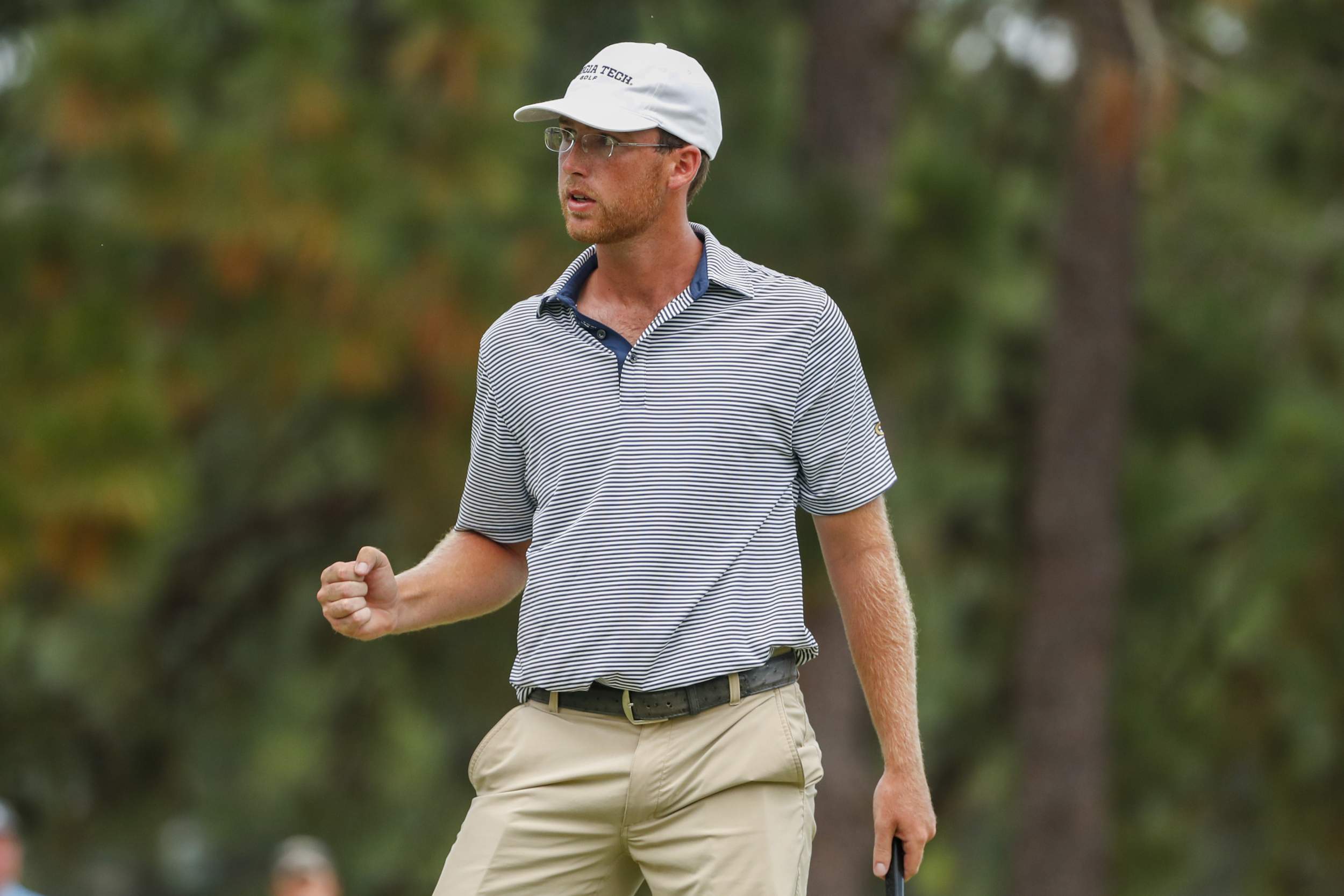 Andy Ogletree, in his first tournament of the fall, posted his fifth top-10 finish since last January.

“I felt like we met the challenge of this golf course and the weather conditions pretty well Saturday and Sunday. We got more rain and wind today, and the last hole is very tough. This was a great test for us, both with the golf course and the strength of the teams in the field, and we came through it very well. Proud of Ben Smith today, he had his best tournament and gave us a round that we really needed.”

TOURNAMENT INFORMATION – Georgia Tech competed in this event for the second time, and first since 2006, at the famed Olympia Fields Country Club (7,219 yards, par 70), which has hosted two U.S. Open Championships and two PGA Championships.

Olympia Fields, hosted by the University of Illinois’ golf program, annually attracts one of the strong fields in college golf, and this year brings in 10 of the nation’s top 25 teams as ranked in the preseason by the Golf Coaches Association of America. The 15-team field includes Alabama (21), Baylor (20), California (16), Florida State (27), Florida (25), Georgia Tech (3), Indiana, UNLV, North Carolina (23), Northwestern, Oklahoma State (4), Pepperdine (10), Texas (1) and Texas A&M (14). The host Illini are ranked 19th.

The ACC Network is a linear and digital platform dedicated to 24/7 coverage of ACC sports that launched on Aug. 22, 2019. It will exclusively televise approximately 450 live events each year, including 40 football games (beginning with Georgia Tech’s 2019 season opener at Clemson on Aug. 29), as well as 150 men’s and women’s basketball contests.

Georgia Tech’s golf team is in its 25th year under head coach Bruce Heppler, winning 61 tournaments in his tenure. The Yellow Jackets have won 18 Atlantic Coast Conference Championships, made 29 appearances in the NCAA Championship and been the national runner-up four times. Connect with Georgia Tech Golf on social media by liking their Facebook page, or following on Twitter (@GTGolf) and Instagram. For more information on Tech golf, visit Ramblinwreck.com.