Home MMA Let’s see how mighty this mouse really is 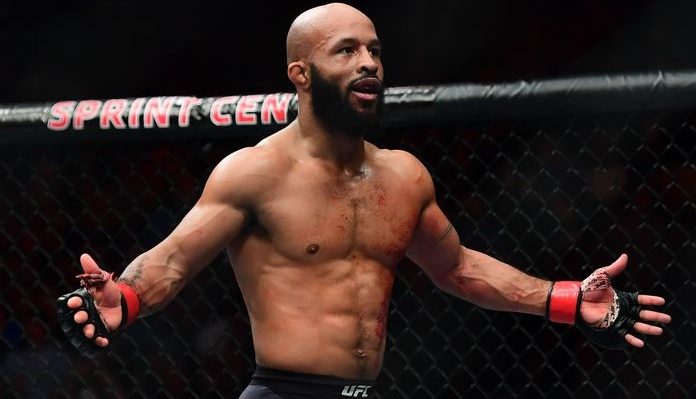 Despite having come up short in his most recent attempted title defense, there is no question that Demetrious Johnson is one of the all-time greats.

Even in his rematch with Henry Cejudo at UFC 227, it wasn’t as if the mighty one was blown out of the water in his split decision loss.

With a trilogy bout surely on the horizon (at some point), looking back at the lead up to the bout, Cejudo wasn’t given much of a chance or garnering much interest in a second go with the flyweight king after being easily dispatched of just two years prior.

In the MMA world, it seemed like there was only one flyweight rematch that had begun to really start to build up some momentum for “Mighty Mouse”… And now with the UFC title off of his waist, the MMA Gods may be all the more inclined to let Johnson explore this option to it’s absolute fullest.

No longer champion at 125-pounds, the likelihood of Johnson ever revisiting his old home of 135-pounds seems to have been tossed directly out the proverbial window.

Of course, the hope was that we would see Johnson go up to challenge for a second crown after breaking Anderson Silva’s title defense record of 10 with 11 of his own.

Now the point in going up has even further evaporated. But there is still hope for a goal that Johnson revealed to us just days before UFC 227…

Speaking with the media following the open workouts, Johnson made the statement that collecting all the other titles around the world is what really gets him excited. An interesting proposition to say the least.

The biggest problem with this lofty task was that Johnson was still slapped with that UFC champion label. Free of it for the first time in six years, Johnson’s hypothetical mission to earn a title everywhere he possibly can around the world now has a bit more of a chance.

At just age 27, Kyoji Horiguchi has gone 25-2 in his MMA career with one of those losses coming to Johnson. It actually happens to be his only loss since 2012.

After the fight with the former UFC champion, Horiguchi has won 10 consecutive outings and firmly solidified himself as a mainstay in the flyweight top 3 as well as a top bantamweight.

Three victories after his only UFC loss, Horiguchi would part ways for the RIZIN Fighting Federation where he has been reborn as a bonafide superstar.

Already a Japanese star prior as a former Shooto champion, the “new Pride FC” style Japan-based promotion has ascended Horiguchi to new levels of fame and popularity. And along with that, his already incredible skills have only gotten better.

Many people seem to forget that the first encounter between Johnson and Horiguchi was pretty close. Specifically in the striking department.

Horiguchi has been one of the very few fighters that has been able to match Johnson’s speed and lateral movement essentially to a tee. The difference maker obviously just came down to Johnson’s wrestling which Horiguchi was unable to stop.

With clear improvements everywhere, Horiguchi is more than ready for this rematch and if it were to be on his home soil…it would be an absolutely massive occasion.

This rematch has to happen in Japan for RIZIN. It can not and just will not be in the UFC.

Horiguchi has no reason to go back now that he’s one of if not RIZIN’s biggest stars and being treated as such. Because of that, they would promote the rematch as the biggest fight of all time.

Not saying that it would be of course, but that’s how it would be treated and for RIZIN and Japan, it definitely would be their biggest MMA fight. To say ever would likely spur some debate because then we get into talking about fights like Mirko Cro Cop vs Fedor Emelianenko…but it would definitely be huge none the less and there’s just no denying that.

The UFC has continually shown that they really just don’t care much for the flyweight division which would be even less of a reason for Horiguchi to go back if that was an option. And it’s pretty much the reason that he left too.

It would just be an entirely different and better move for it to happen in the ring rather than the Octagon which creates a whole new dynamic as well.

Along with the new fight feel, the new atmosphere, there would be a whole new ruleset for Mighty Mouse to play with and he has voiced his interest in that in the past. Knees to grounded opponents, soccer kicks and stomps are much more of a game changer than one might expect.

With Johnson’s relationship with the UFC/Dana White constantly being in a bit of question, it’s time to make a prayer to the MMA Gods that sometime in the not so distant future we will get this rematch between two of the lighter weight divisions greatest fighters.

And with RIZIN’s continual growth, they will just become that much more of an enticing option for fighters.

But also, in the case of Johnson, it comes down to how much drive and motivation remains inside the 32-year old former champion to go on and chase these types of goals as he is a family man and a very successful video gamer. It will be hard to top the top of the mountain.

And for that, the chance percentages are hopeful, yet reasonable. But that’s the whole point of going to the MMA Gods in the first place.

Check out the previous Dear MMA Gods’ here: 1. Can we get an Iron-Highlight one day?, 2. It’s not too late for the WEC super fight, 3. The true time for Affliction is now…, 4. We need to see Cyborg’s toughest test