An MMA drama with heart, conviction and a killer right hand jab, “Embattled” is a different kind of fighter story, one where the consequences of the fight are more important than the win-loss records of its fighters.

Stephen Dorff towers over the film as Cash Boykins, a brash, obnoxious and repugnant MMA champ who’s like an Alabama-raised version of Conor McGregor. But it’s Darren Mann as Boykins’ son, Jett, who steals the show, and gives “Embattled” the humanity it needs to stand out among the other fighters in its weight class. 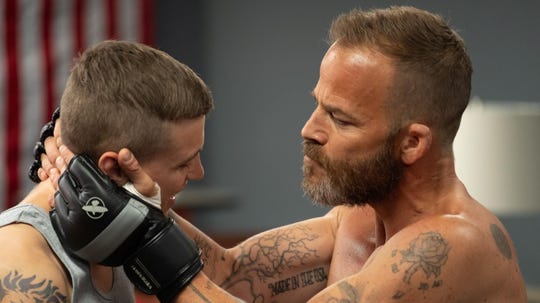 Jett is a high schooler who longs to follow in his father’s brawler footsteps. But while Cash is off living in one of his mansions with his new wife Jade (Karrueche Tran), Jett is at home with his mother, Susan (Elizabeth Reaser), who’s having a hard time making rent payments and taking care of her special needs son (and Jett’s brother), Quinn (Colin McKenna). Cash has repeatedly refused to support his ex-wife and his children in any financial dealings, leaving her struggling to make ends meet.

Tensions between Jett and Cash build and eventually boil over, leading to a showdown between father and son in the center of an MMA ring. But this character-driven drama, written by David McKenna (“American History X”) and directed with a sharp eye by Nick Sarkisov, is more about what happens outside the cage than inside it.

Dorff makes a convincing trash pile, a guy who freely uses both the c-word and the n-word and who is begging for a roundhouse kick to his face. But Mann (“Giant Little Ones”) has the richer character, whose bruiser impulses are softened by his duty to his family and his love for his brother. He gives “Embattled” something it desperately needs — a character to root for — and further, he makes a name for himself as an exciting actor to watch going forward. No matter the outcome, he’s the winner here.

Stephen Dorff and Darren Mann are a father and son who settle their differences in an MMA ring in this fighter drama that has a welcome amount of humanity to its characters. (117 minutes) GRADE: B (on VOD)