The chances​​ weren’t great for me in late August 2012, when I drove an hour and a half from the northern suburbs of Chicago into downtown. I had seen a flyer for Dwyane Wade’s “Wade’s World Weekend” event, reached out to a communication contact to request a one-on-one with Wade and was told it would be tough because of his other media commitments, but that I could come and try. I thought to myself, ‘Is the drive worth it?’

That’s when I learned a very important lesson that will forever stay with me: Being present is always worth it.

I did get quality time with Wade, who spoke to me about an array of topics, from Derrick Rose’s ACL injury, to his assessment of the Bulls, to the pressure of being defending champions and more for my piece. It was my first face-to-face interview and an experience I still remember fondly and cherish, along with a grainy photo taken that day. 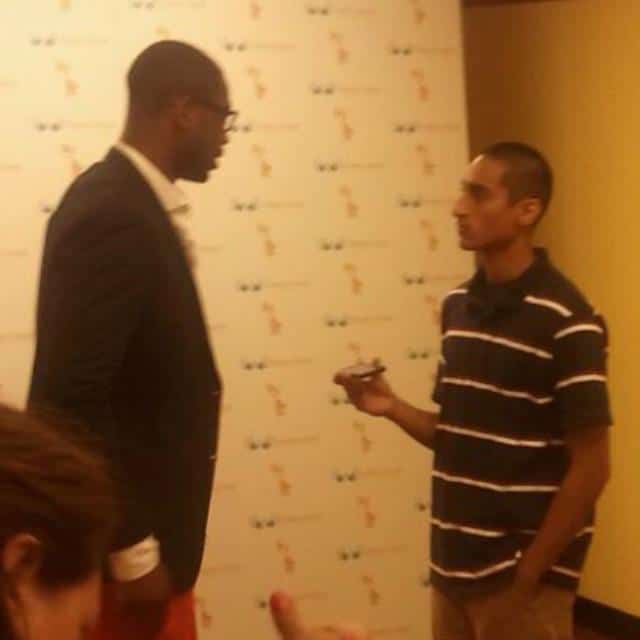 My first real passions in life were basketball and writing, and I hoped to combine that with my love for the NBA and the ins and outs of the league. I loved the NBA and playing basketball, so I had to find my route to stay around the game. Writing about it was that route.

I grew up roaming the websites of RealGM and HoopsHype for the latest rumors. Whether it was driving to Milwaukee or nearby Indianapolis in high school, I always wanted to challenge myself and find interesting topics to write about. It was more than just the news items that interested me. It was the behind-the-scenes stories, the rise and fall of players, the teams and people in the league that fascinated me and pushed me to pursue the career. The subjects around the NBA are intriguing and I am proud of the relationships I have formed over the years in this field because it showed me the respect and openness of many of them.

My RealGM editor, Chris Reina, and Yahoo Sports editors, Johnny Ludden and Joe Garza, each engraved different and important lessons within me. Being detailed, finding stories and angles others may not provide and just write, write, write.

Here at The Athletic, I’m excited to reinvigorate my feature, long-form and column writing to go along with my coverage of the league’s news.

The editorial and writing staff is full of talent. I’ve also admired so many writers in the NBA, NFL and MLB, including our own Ken Rosenthal and Jay Glazer. In talking to Ken during my decision process the past few months, I was filled with confidence that this would be the spot for me — not to mention the history I shared with Paul Fichtenbaum from a breakfast we had in 2015.

It’s come full circle, and I’m excited to take our readers along for this journey.

The NBA is growing, and Dallas Mavericks owner Mark Cuban was right a couple years ago when he pointed out that the league has a fan base younger than other leagues and has the power to become the best in the world. The fan base challenges everyone in the industry to be better, from owners to players to coaches to us in the media.

There are so many storylines to follow — from news and transactions to the things that happen behind-the-scenes — and I want to ensure readers that we will do our part to share these stories.

If you haven’t subscribed yet, try FREE for a week and get 30% off with this link: theathletic.com/nbalaunch . Comes out to $3.49/mo for access to ALL quality, ad-free local and national coverage on The Athletic.