As Jr. NBA Week kicks off from Oct. 8-15, the Jr. NBA has announced a new program that is aimed to teach and encourage girls and women within basketball and organized sports.

The initiative, entitled “Her Time To Play,” is a program for girls aged 7-14 that incorporates lessons and stories from WNBA players on topics such as self-confidence and healthy lifestyles. Created in collaboration with the Women’s Sports Foundation (WSF), along with the WNBA, USA Basketball, YMCA of the USA, the Women’s Basketball Coaches Association and Boys & Girls Clubs of America, the program is free, and every organization that registers will receive the 12-lesson curriculum, basketballs and whistles, and headbands, wristbands and workbooks for each girl.

A need was seen by the Jr. NBA to encourage youth participation in basketball, especially among young girls, due to recent trends in statistics. According to the WSF, girls drop out of organized sports at about twice the rate boys do by age 14.

“This is an issue we’ve been looking at for some time,” David Krichavsky, NBA vice president of youth basketball development, said. “It was a combination of factors that led us to really want to develop an initiative like this focused on girls.”

While the program has been in the works for over a year, Krichavsky and the planning committee of “Her Time To Play” were particularly impressed and motivated by Steph Curry’s all-girls camp, which he hosted for 200 girls for free on Aug. 13-14. 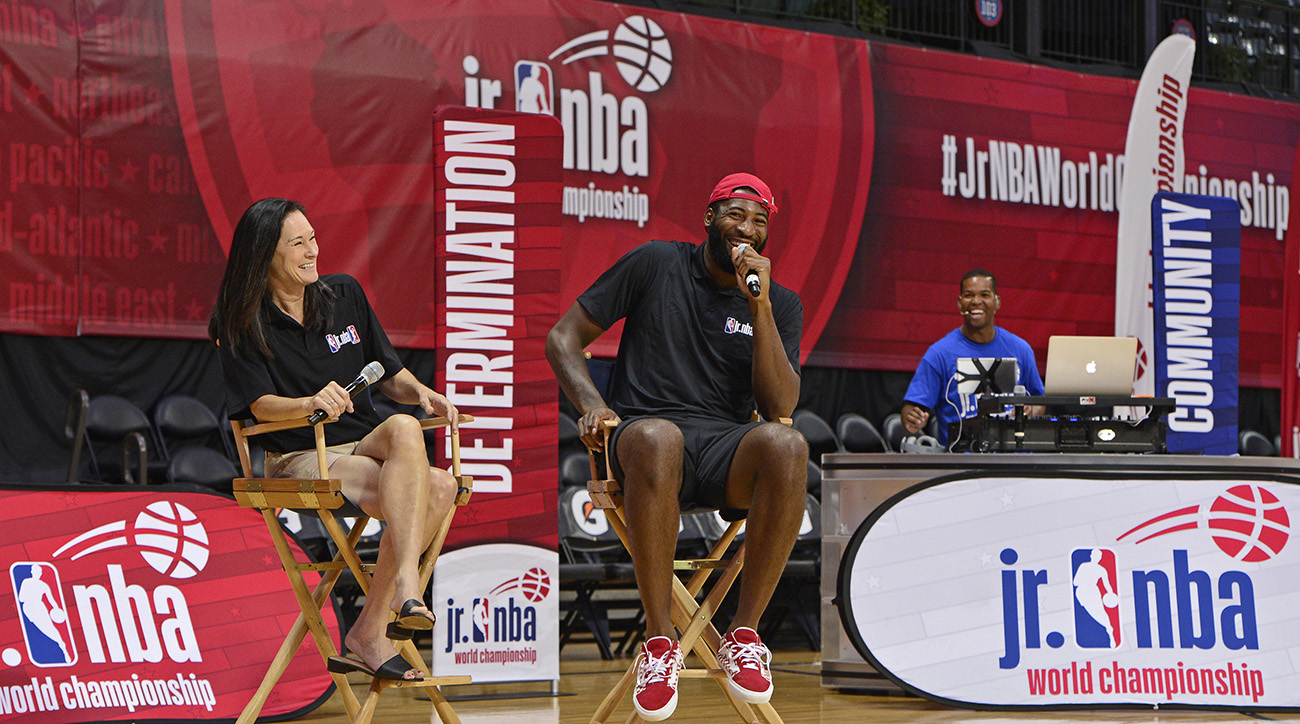 “It’s always so great when NBA players do something for girls,” Jennifer Azzi, former basketball coach and Olympic champion, said. “And it’s obviously not unlike where WNBA players are doing something for girls, but I think when those guys with such high profile are really invested in girls and women, it’s incredible.”

Similarly to Curry, all 30 NBA teams will host basketball events and programs for local youth and communities to celebrate Jr. NBA Week, including activities to tip off “Her Time To Play.” One ambassador of the program, Gordon Hayward, will host a Jr. NBA clinic for 30 local girls in Boston, leading them in basketball skills and drills, along with an off-court leadership activity alongside his wife, Robyn.

Having lead ambassadors from the NBA such as Hayward and the WNBA’s Skylar Diggins-Smith provides girls with stories and interaction straight from their idols.

“The opportunity for young people to interact with NBA players and WNBA players and to play in NBA facilities, just creates a real level of excitement and lifelong memories that they’ll keep with them a long time,” Krichavsky said.

Within the “Her Time To Play” curriculum, each of the 12 lessons includes a story from a WNBA player to help portray messages of nutrition, teamwork, self-confidence, mental wellness, body image and bullying. To Azzi, who helped create the program, these stories are what make the curriculum unique because they have never been accessible before.

“I watched Magic Johnson instead of Skylar Diggins[-Smith],” Azzi said. “In this day and age, we have incredible women in the WNBA as role models [which] is something that our generation didn’t have growing up, because it didn’t exist.”

In addition to preparing girls for the challenges of their youth, the “Her Time To Play” initiative is set to increase the number of women in coaching and leadership roles in basketball. In doing so, the Jr. NBA has committed to provide opportunities for more than 500 new coaches to receive their USAB Coach License and later be recognized for their accomplishments.

According to The Aspen Institute, only 28 percent of youth sports coaches are women, and the Jr. NBA is working to provide the support women need to excel in coaching and leadership roles.

“I think sometimes guys [coach] naturally, and I think for women just to know that there are other women doing it and that there’s the support system out there and the encouragement is there, I think it matters a ton,” Azzi said.

While the Jr. NBA continues to emphasize respect and inclusion among boys and girls of all ages through their Jr. NBA Coaches Forum program in partnership with “A Call to Men” and “Athlete Ally,” “Her Time To Play” will provide girls with role models and lessons aimed to encourage them to stick with basketball and organized sports, whether as a player or in leadership roles.

“We see this program as really a continuation of our goal as successful and inclusive as possible, and hope to inspire a generation of girls that will have great success on the court but equal success off the court in their communities and their schools and their families, and really youth programs like this to put them on a path of success,” Krichavsky said.

The Jr. NBA has also made a commitment to continue the initiative in years to come.

“We recognize that in order to stem the tide of some of the participation issues we’ve seen or to really increase the number of female coaches and role models, that we’re going to have to work at this for a long time, and we’re committed to doing just that,” Krichavsky said.

As for Azzi, she always enjoyed speaking with young girls when she was a WNBA player. Now the Jr. NBA is using those resources, which is needed to instill confidence in young girls in basketball and sports across the country.

“Hopefully we will inspire them to keep going and to work hard and get an education,” Azzi said. “And ultimately, we’d love to see them in the WNBA, but if not, that they become leaders and coaches in the game.

“There are so many lessons to be learned, and I think it’s important we help young girls and women become strong leaders.”