LeBron James moved to No. 3 on the all-time FGM list with this bucket in the first quarter.

LeBron had already passed Wilt in on the all-time scoring list back in November 2018 thanks to three important factors:

LeBron has scored an additional 3,377 points due to 3-pointers and free throws. But on Thursday, LeBron will have officially hit more baskets than Wilt and trail only Karl Malone and Kareem Abdul-Jabbar on both the field goals made list and the all-time scoring list.

When it comes to comparing Wilt and LeBron, what stands out most is the meteoric rise of Chamberlain, which included a seven-year peak unmatched in league history, and the steady consistency and longevity of LeBron. 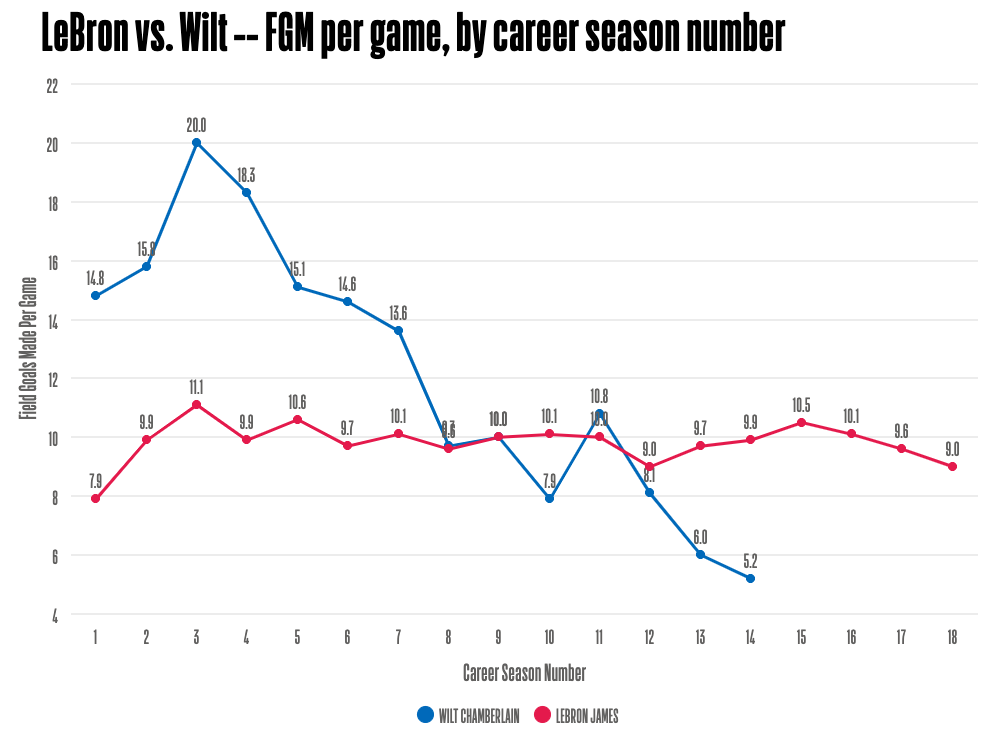 Both players peaked in field goals made in their third NBA season. Wilt made an NBA record 1,597 baskets that season (an astounding 20 FGM per game average), while LeBron made 875 field goals (a career-best average of 11.1 per game). Wilt has the top four individual seasons in terms of field goals made, and seven of the NBA’s 18 total seasons when a player made at least 1,000 baskets.

Players With At Least 1,000 FGM in a Single Season

While LeBron came nowhere close to matching Wilt’s volume of buckets early in their respective careers, there has been little variance in LeBron’s output season over season. Only in his rookie season did LeBron not average at least 9.0 field goals per game — a mark he is currently at in his 18th season.

Take a look back at some milestone baskets in LeBron’s career.

Wilt averaged fewer than 8.0 FGM in three of his final five seasons as his career followed a more traditional trajectory that sees a player steadily decline after reaching their peak during the first half of their career. Meanwhile, LeBron continues to play at an elite level nearly two decades into his career — he is averaging at least 25 points per game for the 17thconsecutive season. 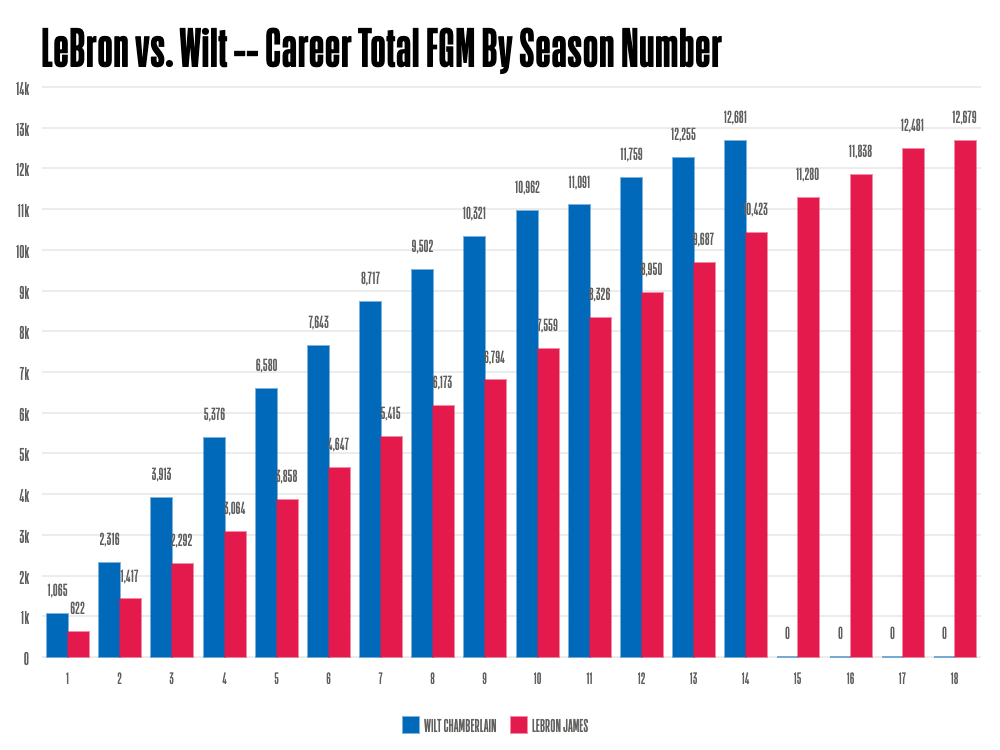 While there are clear differences in the paths to the top four in field goals made for Wilt and LeBron, the two players also have some key things in common. In addition to being outstanding scorers, both have proven themselves as playmakers — each winning an assist title late in their careers (LeBron last season; Chamberlain in 1967-68).

LeBron’s milestone field goals made on climb to No. 3 all-time

On Thursday, LeBron should reach at least 12,682 career field goals made and set his sights on Malone (who holds second place at 13,528) and eventually Abdul-Jabbar (the all-time leader at 15,837). With a career average of 9.85 FGM per game, it would take approximately 86 games to pass Malone and 321 games to pass Kareem. Based on his current play, LeBron should challenge Malone’s mark at some point in 2021-22, but LeBron will have to defy Father Time for about four more seasons to have a shot of catching Kareem.

But before we look ahead to the next milestone, let’s look back at LeBron’s run to the No. 3 spot on the all-time list.