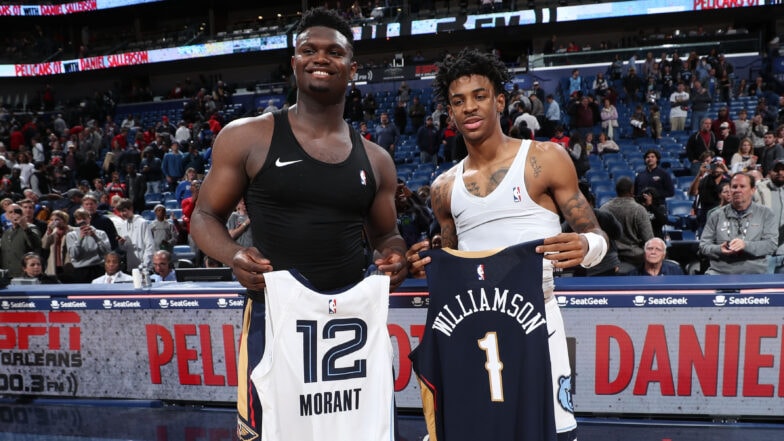 2019 No. 1 and 2 overall picks Zion Williamson and Ja Morant have already established themselves as impact players.

Amazing moments occur on a nightly basis across the NBA. From jaw-dropping dunks to no-look dimes and buzzer-beating game-winning shots, you never know which game is going to turn into an instant classic. With NBA League Pass you won’t miss any of the action.

To help get you ready for the season, here are 20 must-see games from the first half of the 2020-21 season schedule that are available on NBA League Pass.

While the 2020-21 NBA season tips off on Dec. 22 with a TNT doubleheader, opening night for most of the league will take place the following night during a packed 13-game slate. Here are some notable games to keep an eye on to get us started:

Can Russell Westbrook elevate Washington into the playoff picture?

In a blockbuster deal, the Wizards and Rockets swapped point guards, with John Wall headed to Houston and Russell Westbrook coming to D.C. We get our first glimpse of the Westbrook-Bradley Beal backcourt as the Wizards take on a Sixers squad marking their first game under new head coach Doc Rivers.

Charlotte Hornets at Cleveland Cavaliers (7 ET)
No. 3 overall pick LaMelo Ball makes his NBA debut as the Hornets take on the Cavaliers in Cleveland. Ball is one of the most intriguing rookies in this year’s class, having played in Lithuania and Australia over the past two years after forgoing college hoops. How will his game translate to the NBA? We’ll get our first assessment against the Cavs.

New Orleans Pelicans at Toronto Raptors (7:30 ET)
Not only do we get to see the second-year debut of last year’s No. 1 overall pick Zion Williamson, but we get our first look at the newest (temporary) NBA city as the Raptors are set to play their “home” games this season in Tampa, Florida due to COVID-19 travel restrictions that have limited international travel to and from Canada.

Detroit Pistons at Minnesota Timberwolves (8 ET)
The No. 1 overall pick in the 2020 NBA Draft, Anthony Edwards, makes his NBA debut as the Timberwolves host the Pistons. Edwards joins a Minnesota squad anchored by Karl-Anthony Towns and D’Angelo Russell as they look to leap forward after last season’s 19-45 campaign.

Wall opens up on joining Rockets, playing alongside Harden

We mentioned the Westbrook-Wall trade earlier and here we get a look at the other end of that deal, with John Wall making his Rockets debut. This will be Wall’s first NBA game in nearly two calendar years — he last played an NBA game on Dec. 26, 2018 before missing much of the past two seasons due to injury. Combining a healthy Wall with the reigning back-to-back-to-back NBA scoring champion James Harden should make the Rockets fun to watch.

As The Calendar Turns

LA Clippers at Phoenix Suns (8 ET)
The Suns acquiring Chris Paul from the Oklahoma City Thunder easily ranked as one of the offseason’s biggest moves. The savvy veteran point guard joins a young Suns squad that was one of the breakout stories of the NBA restart in Orlando — going a perfect 8-0 in the bubble — even as they still came up just short of qualifying for the Western Conference Play-In Tournament. Adding Paul to the mix should lift Phoenix’s chances of ending their 10-year playoff drought. This matchup with the Clippers will be a good early test for the Suns. And while Paul spent six seasons in L.A. from 2011-17, this squad looks nothing like the team he left three seasons ago.

Boston Celtics at Toronto Raptors (7:30 ET)
This is a rematch of last year’s Eastern Conference semifinal series, which went the full seven games as the Celtics prevailed to end the Raptors’ title defense. Five of the seven games were decided by seven points or less. Jayson Tatum led the Celtics with averages of 24.3 points, 10.3 rebounds and 5.3 assists in the series and had a game-high 29 points in the Game 7 clincher.

Los Angeles Lakers at Houston Rockets (7 ET)
The Rockets were the only Western Conference team to win the season series against the Lakers last season, taking two of three games. James Harden averaged 29.0 points, 8.7 assists and 7.0 rebounds in those three regular-season matchups, while LeBron James and Anthony Davis each averaged 24.5 points while appearing in two of the three.

Jamal Murray vs. Donovan Mitchell. The two young stars guards held an epic duel in the opening round of the 2020 playoffs, with Murray and the Nuggets rallying from a 3-1 deficit to defeat the Jazz in seven games.  Mitchell (254) and Murray (221) combined to score 475 points in the series, passing John Havlicek and Jerry West (463 in the 1969 Finals) for the most points ever scored by a pair of opponents in a playoff series.

Memphis Grizzlies at Portland Trail Blazers (10 ET)
This is a rematch of last year’s Western Conference Play-In, which determined the No. 8 seed in the West. At the conclusion of the regular season, the Blazers held the No. 8 position, so they only needed to beat the No. 9 Grizzlies once in order to secure the spot.  Damian Lillard (31) and CJ McCollum (29) combined for 60 points to lead the Blazers to a 126-122 victory; they advanced to the playoffs and an ultimately short-lived first-round meeting with the eventual champion Lakers.

It’s an all-Texas affair as Luka Doncic and the Mavericks take on DeMar DeRozan and the Spurs. Doncic led the NBA with 17 triple-doubles last season; two of those came against the Spurs, including a 40-point triple-double in a Nov. 18 win. Doncic averaged 32.5 points, 10.5 assists and 9.5 rebounds in four games against San Antonio as the Mavs won the season series, 3-1.

Sacramento Kings at Memphis Grizzlies (8 ET)
While the biggest track meets of the year won’t happen until the rescheduled Summer Olympics in Japan, the NBA will offer its own version of a track meet with two of the fastest young players in the game — Sacramento’s De’Aaron Fox and Memphis’ Ja Morant — facing off on this Sunday evening. Both point guards are the centerpiece of their respective franchises, with Morant is coming off a spectacular Rookie of the Year season and Fox having locked up a max extension with the Kings.

Los Angeles Lakers at Cleveland Cavaliers (7:30 ET)
It’s always special when LeBron James returns to Cleveland to face his former team. LeBron spent his first seven seasons in Cleveland before leaving for a four-year stint in Miami. He returned for a four-year run that included four straight NBA Finals appearances and the Cavaliers’ first and only NBA championship (2016). He returns to Cleveland as a defending champion after leading the Lakers to the 2020 title and becoming the first player to win Finals MVP for three different teams.

Kevin Durant returns to Oklahoma City for the first time as a member of the Brooklyn Nets. Durant spent the first nine seasons of his career with the Seattle/OKC franchise and won the 2014 Kia NBA MVP award as a member of the Thunder. Following a three-year run in Golden State, Durant signed with Brooklyn in 2019 … but missed the entire 2019-20 season due to a torn Achilles’ tendon. How will he look after a full month of games in this comeback season?

Philadelphia 76ers at Indiana Pacer (5 ET)
TJ Warren was one of the breakout players from the NBA restart in Orlando: he was the third-leading scorer in the league during the eight seeding games, racking up an average of 31.5 ppg. That average was bolstered most by a career-high 53-point performance against the Sixers on August 1. Warren finished his first season in Indiana (and sixth in the league) scoring a career-best 19.8 points per game. Was his performance in the bubble the precursor for a big 2020-21 season?

Luka Doncic vs. Trae Young. The two young stars will forever be tied thanks to the draft night trade that landed them in their respective cities. Moreover, Young and Doncic are two of the most dynamic young players in the game today as they finished last season fourth and sixth, respectively, in NBA scoring and second and third, respectively, in assists … in just their second year in the league.

Memphis Grizzlies at New Orleans Pelicans (7 ET)
It is a matchup of the top two picks in the 2019 Draft — No. 1 Zion Williamson of New Orleans and No. 2 Ja Morant of Memphis. That order is flipped when it came to Rookie of the Year voting; Morant edged out Williamson after Zion was limited to just 24 games due to injury. Both players enter the 2020-21 season with a clean bill of health and an ability to create a season-shaking highlight at any given moment.

While this may be Valentine’s Day, don’t expect the Mavericks to offer any love notes to Damian Lillard — the Blazers’ star torched the Mavericks last season. With an average of 42.5 points and 7.8 assists over four games, Lillard notably matched his career-high with a 61-point performance against Dallas on August 11 during the restart. The Blazers and Mavericks split their season series last year, with all four games decided by eight points or less.

Phoenix Suns at New Orleans Pelicans (8 ET)
The Phoenix Suns have been a League Pass favorite over the past few seasons thanks in large part to the play of young star Devin Booker. Back in 2017, Booker ignited one of the era’s biggest #LeaguePassAlert moments when he became just the sixth — and youngest — player in NBA history to score 70 points in an NBA game. Booker’s season-high from 2019-20 was 44 against the Pelicans back in November. Between Booker, Deandre Ayton, Zion Williamson and Brandon Ingram, this matchup features some of the top young talents in the league.

This game features a matchup of two of the league’s unique talents — reigning back-to-back MVP Giannis Antetokounmpo of the Bucks and Nikola Jokic of the Nuggets. In Giannis, you have a player with a combination of size, speed, power and athleticism that has earned him the “Greek Freak” nickname; he’ll pull down rebounds, go coast-to-coast and dunk on anyone in his path. In Jokic, you have a 7-footer that ranks as one of the game’s top playmakers, dropping dimes to his teammates or knocking down shots in unorthodox ways. Both players have a fascinating ability to dominate a game in very different ways.