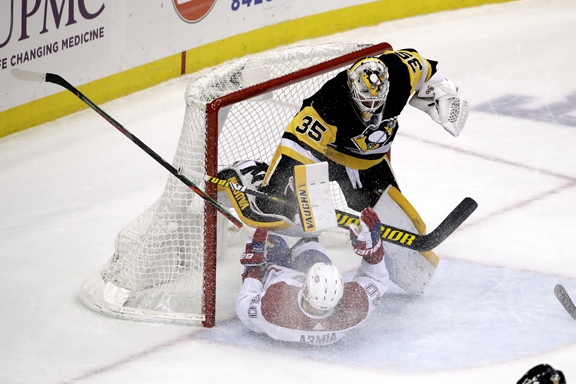 The Montreal Canadiens’ Joel Armia, below, collides with Penguins goaltender Tristan Jarry during the first period in Pittsburgh on Feb. 14. (AP file photo)

With no ice time available during the NHL’s four-month pandemic-forced break, Pittsburgh Penguins goalie Tristan Jarry had little choice but to let his game go to the dogs.

Diesel and Kitty, his two English mastiffs, to be specific.

“That was something I did almost every day, take the dogs downstairs and play street hockey with them,” Jarry said.

“We didn’t really have anyone to shoot on us over the break and I was just playing catch with my girlfriend at home and playing with the dogs. … That was all we could mimic” he added. “I usually would just stick-handle around, and they would chase me around and try to grab the ball.”

The dog days are most certainly over for Jarry and his counterparts. The Penguins are among the 24 teams entering their second week of training camp in preparation for the league’s expanded playoff format that will be played in Toronto and Edmonton, Alberta, starting on Aug. 1.

And goalies, with varying degrees of on- and off-ice preparation, are playing catch-up to regain their groove.

“As a shooter, you don’t really need a goalie to work on your shot,” Toronto’s Frederik Andersen said. “But I think as a goalie, you definitely need someone to shoot at you.”

Skaters could practice their shots in driveways, patios or basements. Goalies had no way to replicate facing a 100 mph slapshot, the speed of the game, angles and dealing with the jostle of bodies in front of a net.

“It’s probably all of the above, but I think the one major thing obviously is speed and traffic, people in front of you, the ability to find the puck,” Dallas Stars goalie coach Jeff Reese said. “Would we like them to be in midseason form? That would be great. But compete is going to make up a lot for that. And we’ve got two veteran guys that certainly compete hard.”

Reese was referring to starter Ben Bishop, who was able to hit the ice almost daily in Dallas, and backup Anton Khudobin, who had limited ice time while spending most of the break in his native Russia.

Today’s breaking news and more in your inbox