Sporting News’ NHL top 25 players under 25 series is a project to identify and celebrate the very best young talent in hockey. A 10-person panel of SN NHL experts submitted ballots ranking players 1-25, forming a composite list. For a detailed explanation on voting criteria and the indexing process, read on here.

The NHL’s youth movement is in full swing.

More than ever, the league’s youngest players double as its most vibrant, marketable stars — and there are plenty. Such an embarrassment of riches is on full display in Sporting News’ NHL 25 under 25 series, a comprehensive ranking of the best NHL players under the age of 25 heading into the 2018-19 season.

Between Aug. 20-24, we’ll reveal our picks in increments of five, counting down from No. 25 to No. 1. Today, we wrap a bow around this feature with the top five reveal. You’ll never guess who’s No. 1 (sarcasm). And by process of elimination, you might be able to assume Nos. 2-5 as well. That’s a testament to the incredible amount of skill included in this installment — they’re all perennial all-stars and, probably, future Hall of Famers. Why he made SN’s list: Simply put, whenever Laine hops over the boards, he’s a threat to score. The No. 2 overall pick in the 2016 NHL Draft hasn’t stopped finding the back of the net in his young professional career, and is very effective in getting his shot off, one of the toughest releases to read for opposing goaltenders in the NHL. Laine, the youngest player ranked by SN’s panel, enters his 20s third in NHL history in goals by a teenager (80).

Future outlook: At 6-5, Laine is also beginning to realize how to use his size and leverage different situations, which will only make him tougher to defend. He’s got the perfect swagger and mentality to be the NHL’s next great goal scorer, and will inherit that title whenever Alex Ovechkin finally hangs them up. 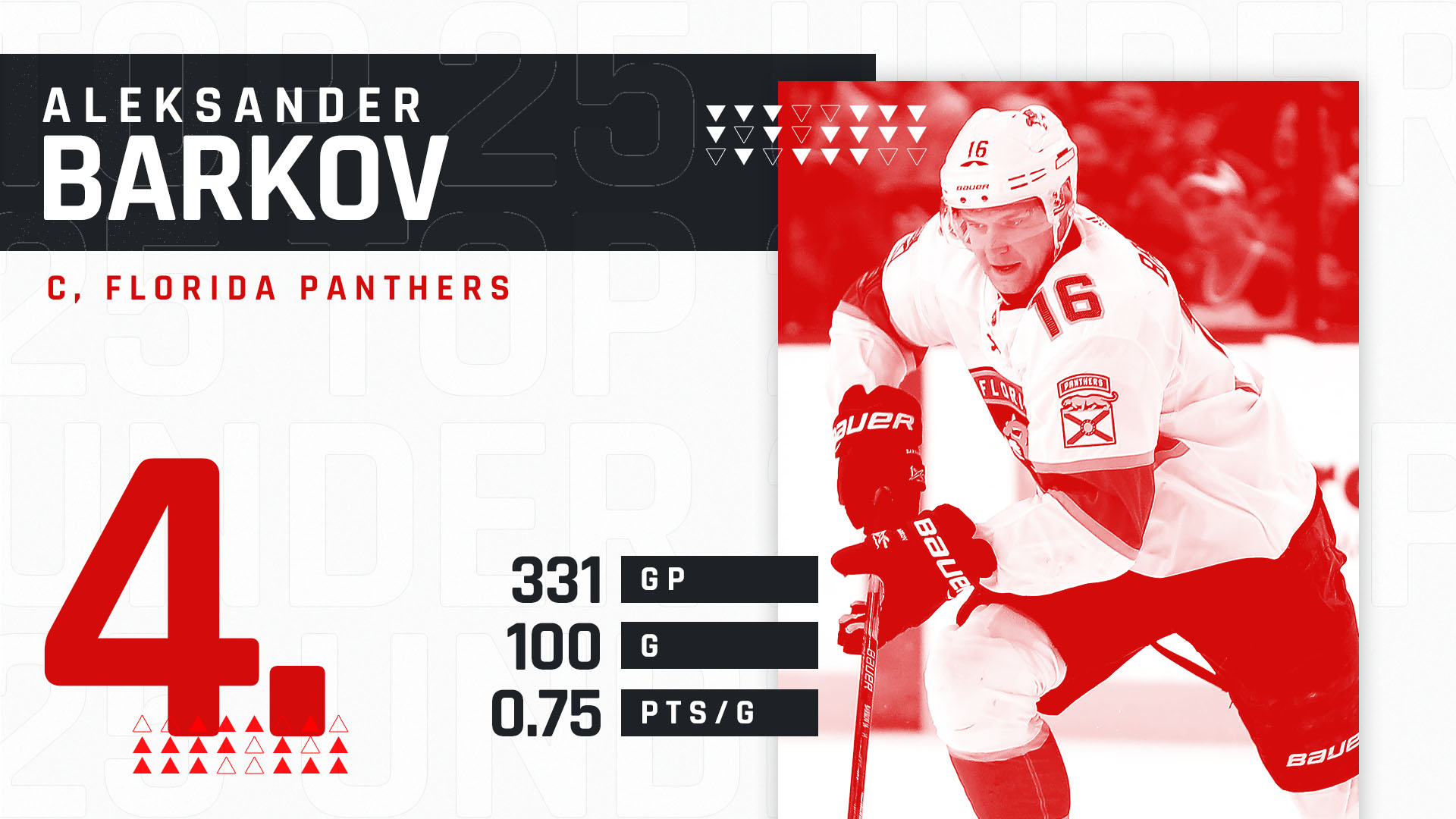 Why he made SN’s list: Barkov isn’t generally mentioned in the same breath as Auston Matthews, Nathan MacKinnon or Jack Eichel as the NHL’s next wave of star centerman, but it’s clear he belongs. The second overall pick in 2013 behind MacKinnon stepped into the NHL as an 18-year-old and has increased his stock each year since, even through injury. In 2017-18, Barkov announced himself as one of hockey’s truly elite two-way forwards, piling up a career-high 78 points in 79 games and finishing fourth in Selke voting for best defensive forward.

Future outlook: Pavel Datsyuk. Patrice Bergeron. Anze Kopitar. Barkov and Sean Couturier are the next wave of defensively dominant forwards who figure to continue the NHL’s Selke monopoly for the foreseeable future. He’s the biggest reason for optimism the Panthers are ready to disrupt the playoff order this season. Why he made SN’s list: A perfect prism that sheds light on Matthews’ dominance in his two NHL season of service: He’s first in the NHL in 5-on-5 goals the past two seasons (55) despite missing 20 games in his sophomore year due to various injuries. Matthews is already such a proven driver and producer of offense, and he still could have room to grow.

Future outlook: If he stays in a Maple Leafs sweater long term (which seems like a safe bet), Matthews will have John Tavares flanking him on the depth chart, the definition of a matchup nightmare. So that leaves Matthews in a cushier position, still years before he’ll truly be in his prime. He’s a better defensive player than he gets credit for, and he’s finding ways to take over games in different ways. Why he made SN’s list: MacKinnon’s stock has skyrocketed since this time last year, perhaps more than any other player in the NHL. In August 2017, the Avalanche were still dealing with the Matt Duchene drama. After he was shipped out in September, the weight of the franchise fell on MacKinnon’s shoulders, and he responded by orchestrating one of the most remarkable year-over-year turnarounds in NHL history as Colorado improved by 47 points and reached the postseason. MacKinnon’s 39 goals and 97 points were career bests by a country mile, and would have won him league MVP in a normal year uncontested by Taylor Hall’s heroics.

Future outlook: Now that MacKinnon has made good on the hype being drafted No. 1 overall in 2013, it’s up to him to sustain it. There’s no reason he can’t be a fixture in MVP and scoring title races for years to come. 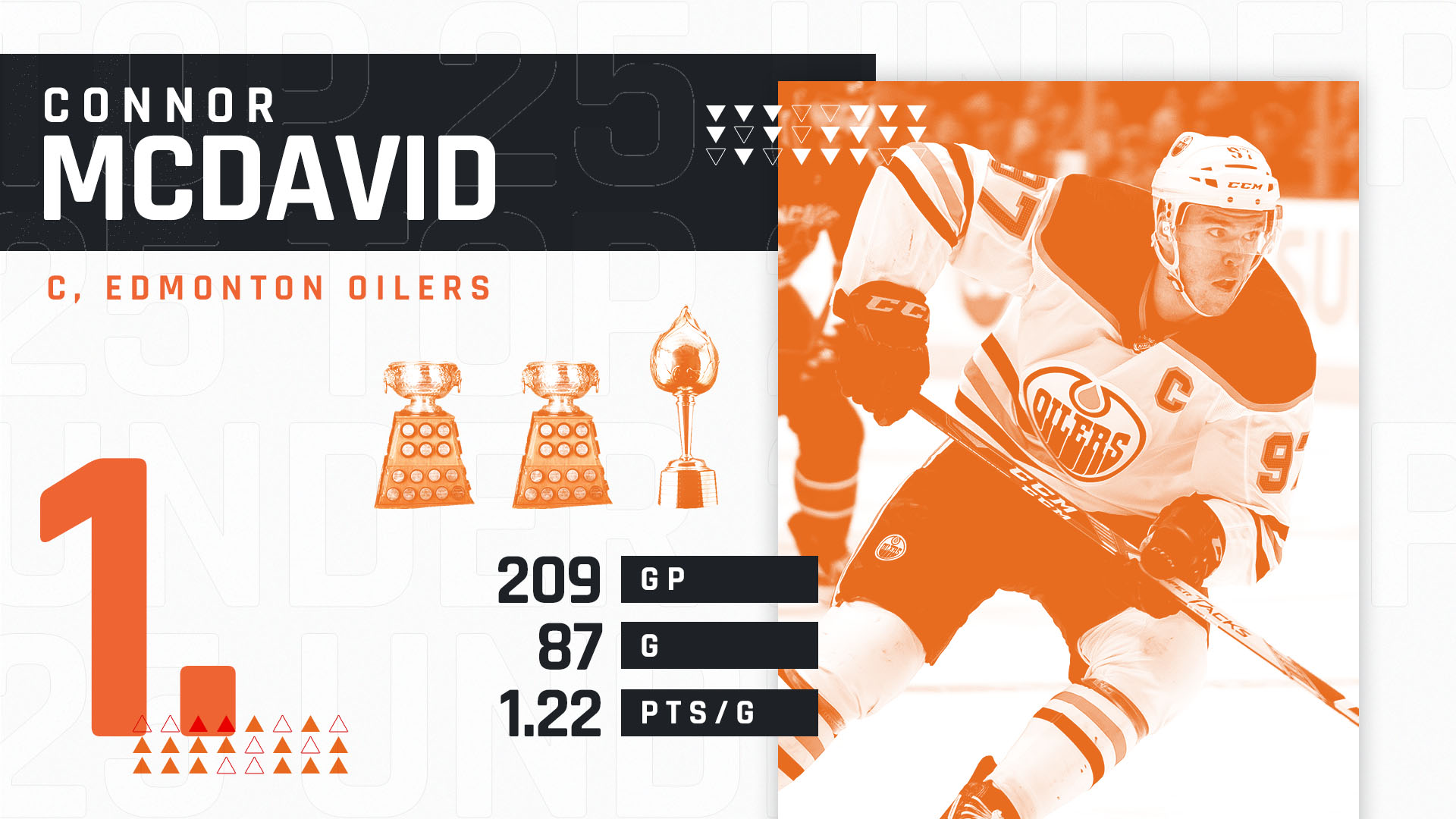 Why he made SN’s list: There shouldn’t have been much suspense about which player would top this exercise. McDavid is SN’s unanimous selection at No. 1, earning 10 out of 10 first-place votes. It wasn’t close. Three seasons, two scoring titles, and one MVP award for snapping Edmonton’s nine-year playoff famine, he’s already one of the most accomplished players under 25 all time. McDavid isn’t just the NHL’s best under-25er; he’s arguably the best hockey player on the planet right now. At this juncture, the only thing holding him back is the Oilers’ ineptitude, but he has the ability to overcome that, too.

Future outlook: There are still plenty of boxes for McDavid to tick. The Stanley Cup, for one, is a biggie, and he should get there sooner than later. There was a Conn Smythe pall over Sidney Crosby’s legacy until recently and McDavid will face similar scrutiny. But there have only been three MVPs in the history of the NHL 20 years old or younger: McDavid, Crosby, and Wayne Gretzky. No. 97 stands to join them in the greatest ever conversation one day.