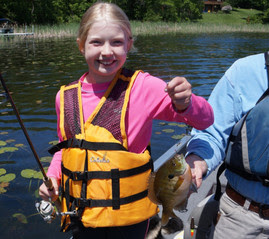 Anglers can weigh in on proposed special fishing regulations that, if adopted, would become effective next year. Most of the changes proposed by the Minnesota Department of Natural Resources are aimed at protecting and improving sunfish sizes by lowering daily limits on 52 lakes.

“The majority of the proposed regulations make up the second and final year of the DNR’s Quality Sunfish Initiative, which is intended to address concerns by some anglers that the size of sunfish is either declining or in danger of declining,” said Jon Hansen, fisheries program consultant for the DNR. “We’re proposing daily limit reductions and invite people to share their input via an online survey or by attending an in-person meeting.”

The proposed lower daily limits on 52 lakes would go into effect in March 2022. Under the proposal, sunfish daily bag limits would be reduced from the statewide limit of 20 sunfish to five sunfish on some lakes and 10 sunfish on others. Some lakes also have similar proposals for lower crappie daily bag limits.

The DNR made an online presentation and comment opportunity available for the proposed changes in June. Thus far, the DNR has received nearly 450 comments through the online survey. The online survey is open through Sunday, Oct. 31.

Consistent with state law, the DNR also will host in-person open houses in each county where the proposed changes would apply and one in the Twin Cities metro area to cover all proposals. For those who want to attend an in-person meeting, information can be found on the DNR website or by calling an area fisheries office. The meetings will take place on dates between Sept. 21-Oct. 20. The metro area open house will be from noon to 4 p.m. on Tuesday, Oct. 5, at the DNR’s Central Office at 500 Lafayette Road in St. Paul. Please check the webpage for any changes based on the evolving COVID-19 response.

Notification of the proposed changes to special fishing regulations have been posted at the accesses to each lake included in the proposal.

In addition to the 50 lakes where the DNR is proposing new special sunfish and crappie regulations, the DNR also is proposing minor changes to 63 lakes that already have special reduced possession limits. Under these changes, the reduced possession limit will change to a reduced daily limit, which will allow an angler to take a daily limit from a lake multiple days in a row until reaching the statewide possession limit (20 sunfish, 10 crappie). The change will create consistency with the newly implemented Quality Sunfish Initiative regulations and is not expected to have additional biological impacts.

Other proposed regulation changes The DNR also is proposing changes to existing regulations on two lakes. A set of special regulations for crappie, sunfish, walleye and yellow perch on Crawford Lake in Wright County have been in place since 1998. The goals associated with the fish populations have not been achieved and Sauk Rapids Area Fisheries staff are asking for feedback on a proposal to simplify the regulations.

Similarly, East Metro Area Fisheries staff are proposing to let an experimental regulation for walleye on Clear Lake in Anoka County expire after a 10-year trial failed to show positive results in the walleye population. For more detailed information or to submit input, contact the area fisheries office, attend the in-person public meeting, or complete the online survey.