Home SOCCER NWSL Vs. Europe To Settle The Old Debate

The Women’s International Champions Cup returns on Wednesday, giving us a rare glimpse of how the best club sides in Europe match-up with the NWSL elite. This year’s tournament boasts the defending UEFA Women’s Champions League winner, Barcelona, and the most recent NWSL champ, the Portland Thorns.

Barça’s opponent in the first semifinal on Wednesday evening in Portland is the previous standard of the women’s game, Lyon. Portland, on the other hand, gets Challenge Cup champ Houston. Nobody really expected the Dash to win that one, and absolutely no one expects them to lift the trophy here, so I’m just gonna go ahead and predict that Houston wins it all.

On TV, the matches will air on ESPN2, ESPNU and ESPN Deportes, and you can always turn to the ESPN app for streaming. 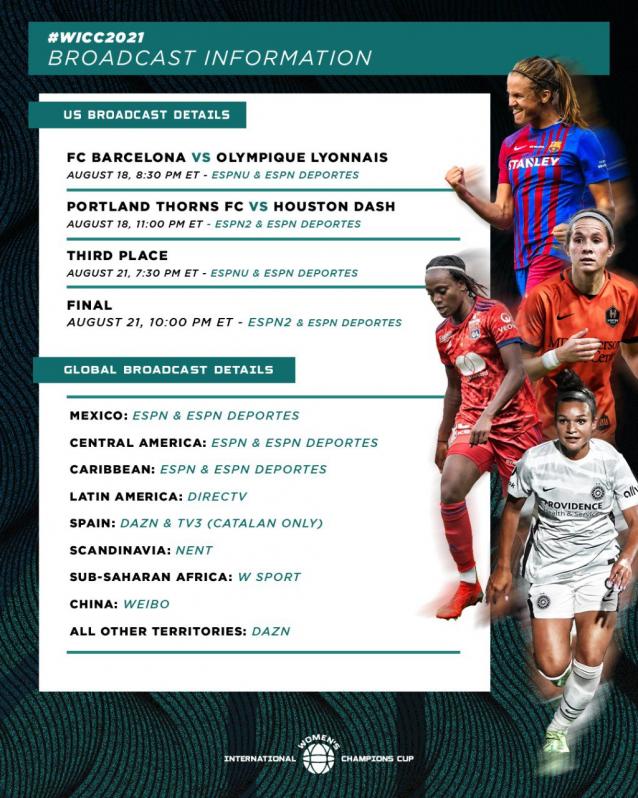 After five straight Champions League triumphs, Lyon fell at the quarterfinal stage of last year’s competition to PSG. That same side also put an end to their 14-year reign over Division 1 Féminine, but Lyon is desperate to return to the top.

Lyon smashed PSG 5-1 in preseason play back on Aug. 6, so things are looking pretty good.

Fresh off a historic league, cup and Champions League treble, there’s no doubt that this is the world’s best team. The offseason has seen Vicky Losada join Manchester City and Kheira Hamraoui depart for PSG, but reinforcements also arrived in the Wolfsburg duo of Ingrid Engen and Fridolina Rolfö, as well as Spain captain Irene Paredes after the expiration of her PSG contract.

Houston qualified for the ICC by virtue of winning the 2020 NWSL Challenge Cup, although that was over 385 days ago. The club’s 2021 season has been mediocre with five wins, six defeats and three draws in 14 matches, which puts the side above only Louisville and Kansas City in the table.

Despite representing Great Britain at the Olympic Games, Rachel Daly remains the team’s top scorer with two goals in five games. Shea Groom has pitched in with two goals and two assists in 12 games, while Kristie Mewis had one goal and two assists in six before representing the U.S. in Tokyo. Goalkeeper Jane Campbell also returns after serving as the USWNT’s third-choice.

Portland won the 2020 NWSL Fall Series and will host the ICC. The team has continued that form during the 2021 campaign and is flying high at the top of the table with nine wins, three defeats and two draws from 14 matches. No side has scored more (21) or conceded less (eight).

The leading scorer is the No. 1 overall pick of the 2020 draft, Sophia Smith. The 21-year-old has four goals and one assist in 10 games. Simone Charley has scored three goals, while Rocky Rodriguez, Meghan Klingenberg and Morgan Weaver have each provided two assists.

The Thorns have returned an all-star contingent from the Olympics as well, including Crystal Dunn, Lindsey Horan, Adrianna Franch, Becky Sauerbrunn and Christine Sinclair.

Also keep an eye out for 15-year-old Olivia Moultrie, who became the youngest player in NWSL history back in July.