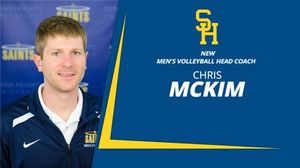 McKim is the fourth head coach in the history of the Saints men’s volleyball program.

“I am excited to serve as Siena Heights University’s next men’s volleyball coach,” McKim said. “I would like to thank Athletic Director Sue Syljebeck, Assistant AD Scott Oliver, and the entire search committee for bringing me back to my alma mater. The foundations for success have been more than set by my predecessor, Coach Kim Berrington. The program will carry her mark well into the future. In conversation with the team, the men are eager for the season to begin and the energy is palpable.”

In 2019, McKim’s first season at Graceland University, the Yellowjackets upset the 7th ranked team in the nation on their way to becoming the most improved team in the country. The 2020 campaign closed early due to COVID, but McKim’s Yellowjackets still matched a program record of 6 conference wins.

The previous four seasons McKim held the position of Assistant Coach for the men and women’s volleyball teams at Siena Heights University under Head Coach Kim Berrington. The 2018 men’s volleyball team finished 19-7, a school record, that included a win over the 5th ranked team in the nation. The 2017 women’s team finished 25-7, a school record, with three regular-season tournament wins at Concordia, Siena Heights, and Aquinas-Cornerstone. Earlier in the spring of 2017, the men’s team finished 16-11 after beating a top-ten ranked team for the first time in school history. In 2016, the women’s team posted a solid record of 21-12.

Prior to collegiate coaching, McKim taught History at Nogales High School in Arizona.

McKim earned his BA from Grove City College and MA from Siena Heights University. In addition, McKim is a proud graduate of North Allegheny High School, the defending Pennsylvania State Champions in both boys’ and girls’ volleyball.