Apart from the whole weird re-surf on the lefts thing* which confused just about everyone, today’s format felt the best of any of the last four days. The first couple days felt too long and hard to follow; yesterday, when everyone surfed two waves, felt like it went by too quick to have any narrative. Even though it was the last qualifying run, it was hard to invest attention because 50 people surfed. Today, eight guys and four women, each surfing three waves each, built drama, waves mattered, it was easy to see what was at stake on each run.

And to the surprise of absolutely no one, Gabriel Medina dominated from start to finish. Despite the fact that he’s known for ruthless tactics in man-on-man heats, he thrived on the man-versus-pool leaderboard format, and the pool showcased his depth and range more than anyone.

And to be fair, this whole new leaderboard format worked differently for different surfers. For Kelly Slater, he needed something to push against. “I felt like I got more focused once I needed a score,” he said. “But Medina was the opposite — he came out straight away. He was the guy to put the number on the board and make everyone step up.” 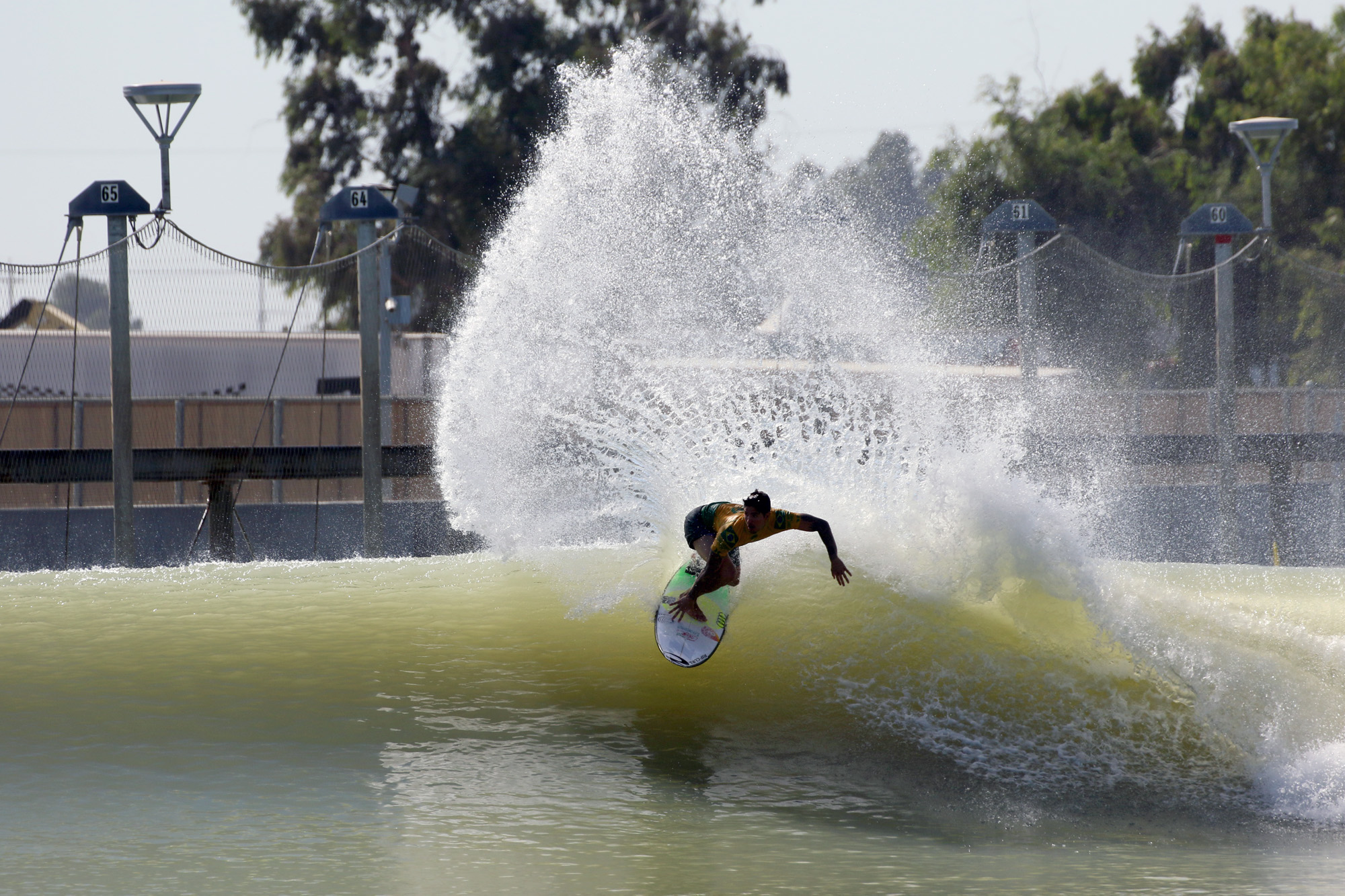 Medina’s win also silences the critics who claim the pool’s better for regularfooters. “I actually think it favors goofyfooters,” Kelly said. “Medina has taken advantage of what I think is an advantage for regularfooters at Teahupoo or Pipeline — he’s taken that to a whole different level here. He’s obviously pulled way ahead of everybody. This showcases how much variety and depth he has in the layers of his surfing. He’s proven to surf well in big waves, but he grew up in small waves, in beachbreaks and he’s got such good feel for everything a wave does. Also, I think he has a plan in his head, but he’s able to be in the moment and ride the wave as it presents itself.”

This runs counter to the strategy some guys had, where they had runs pre-planned in their head. “I think Filipe and Medina are the two guys who, when they really lock in, there’s zero thought of before or after. They’re right in the moment. They surf into a place where they’re so confident in their skill that they’re gonna make things that throw it out there. Like: ‘I’m gonna stick this. I should stick this. Why would I worry about it?’ High level stuff.”

Speaking of high level stuff, Filipe’s 9.8 right was far and away the best 45 seconds of the event, and set a benchmark for what’s possible here. “You literally can’t find more spots on the wave to throw things in than he did,” Kelly said. 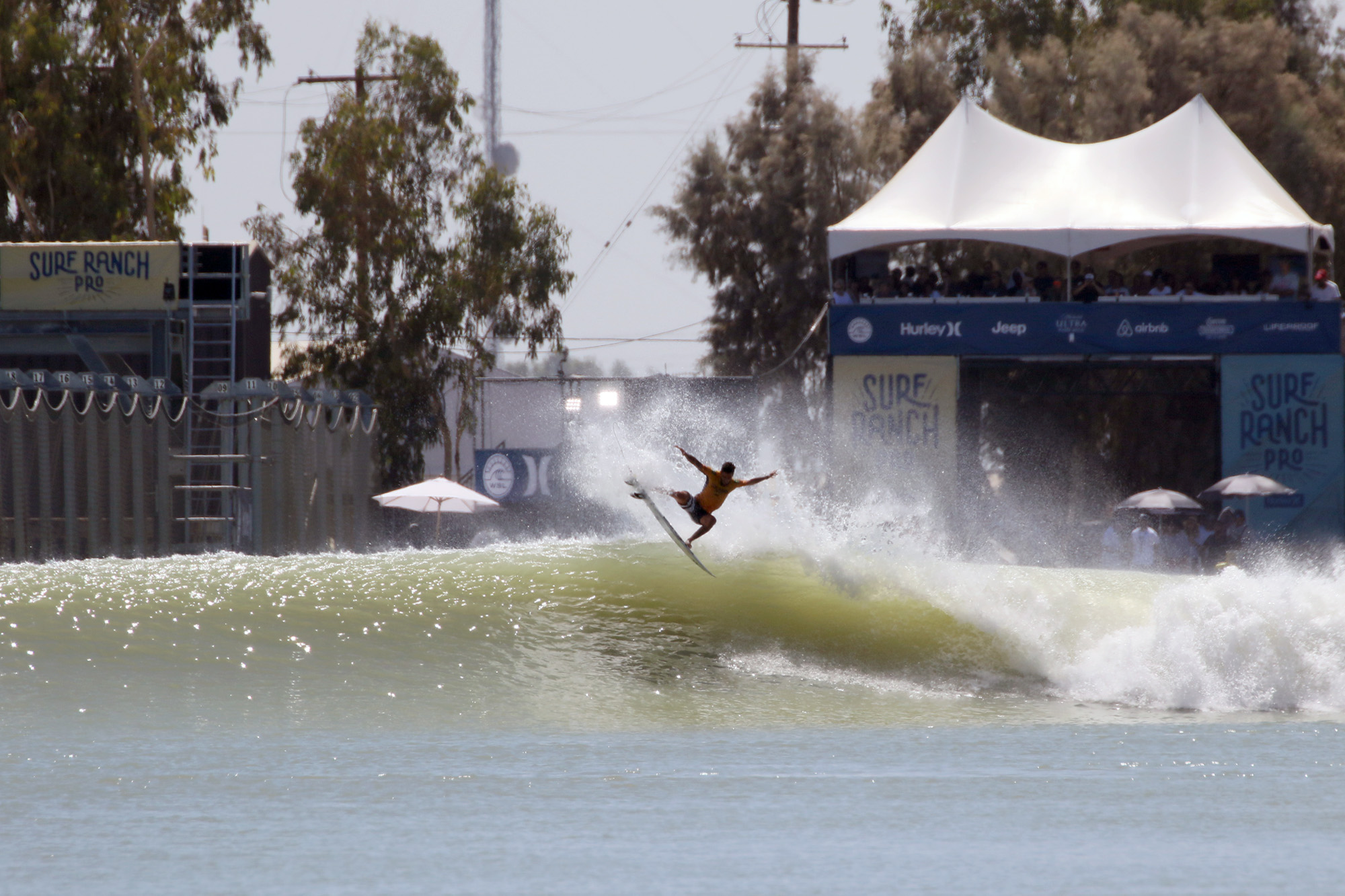 “After making a mistake on the left, I knew it was time to go into fifth gear,” Filipe said. “I knew I needed to mix it up a little bit. I don’t know what else I could’ve done to get a ten.” (Us, neither.)

The other highlight of the event was Julian’s massive air in his final right. He’d already lost to Medina, and had failed at a few big spin attempts on the left, which may have been a factor, but the speed, distance and height of that thing had the entire sweaty crowd on its feet.

“I had a plan, I stuck to my plan,” Wilson said. “I couldn’t quite execute today. I was going for a big spin on the left because I knew it was something nobody else had, and I knew it was a point of difference because everything looks kinda similar out here. And I knew if I could execute that I would’ve really given the judges something to think about. But once that didn’t happen, I knew I could go really high on the right.”

On the women’s side, Carissa Moore also dominated from start to finish to win her first event of the year. “The pool is such a new thing,” she said. “It’s a wonderful canvas; it really shows what kind of surfer you are and it’s a different kind of pressure.” 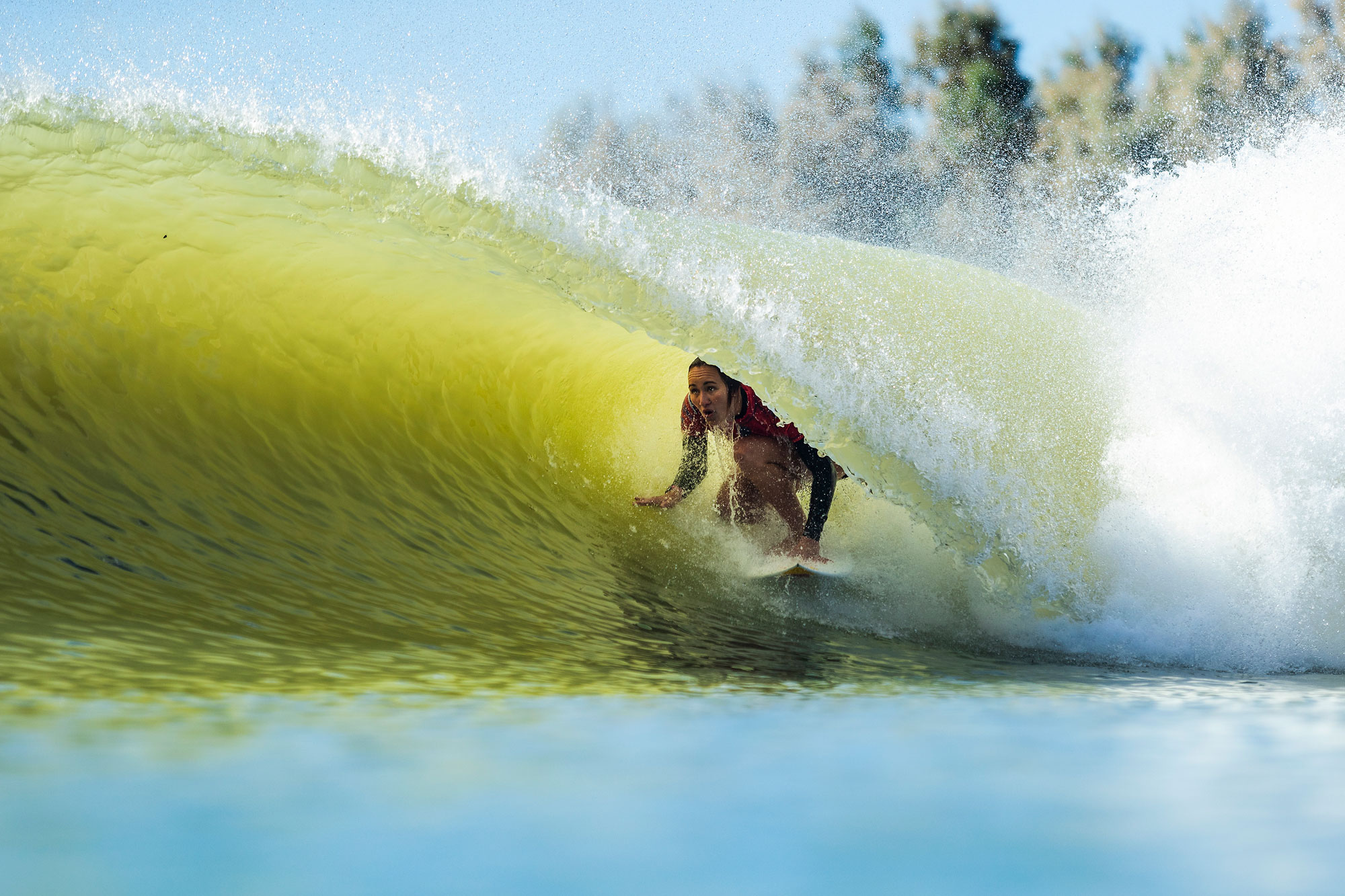 Moore also recognized the importance of being in the moment “I was working on my mental game coming in,” she said. “There’s limited practice and a lot of down time and the idea of having to watch your competitors practice because there’s screens everywhere — it’s right in your face. You can go into it with a plan, but it’s still surfing — before you stand up, you have to let go. The wave changes a little bit, so you have to adapt and your timing’s gonna be off sometimes — it’s still surfing.”

That said, “it exceeded my expectations,” Moore continued. “I thought with so many of the same waves it would get boring and redundant, but you really got to see different surfers and their styles.”

Up next: the anti-wavepool leg, France and Portugal. (And as of right now, Kelly Slater will not be surfing. “I probably couldn’t requalify anyways, and I need a couple months of rehab on my foot,” he said.)

*Midday, for unknown technical reasons, four or five lesser-quality lefts broke. “They were like waist-high,” Owen said. The commissioner decided that everyone would get a new left, which threw the whole schedule off.