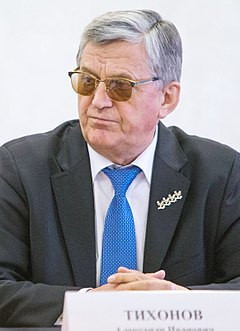 A proposal by Russian Alexander Tikhonov will be put forward at the International Biathlon Union (IBU) Congress for the membership to reject the two Presidential candidates after he claimed neither Baiba Broka nor Olle Dahlin were deserving of the position.

Tikhonov, a four-time Olympic champion who has been accredited as a Georgian delegate for the Congress in Poreč in Croatia, told Russia’s official state news agency TASS that he was hopeful the Congress would be put to a vote.

The 71-year-old, sentenced to three years in prison following a conviction for conspiracy to commit murder in 2007 but who did not serve any jail time owing to an amnesty, will be among those representing the National Biathlon Federation of Georgia at the Congress beginning on Wednesday (September 5).

“I will make a congressional proposal that none of the candidates deserves to be the President of the IBU,” Tikhonov said.

When asked for a response by insidethegames, Broka hit back, claiming Tikhonov “always finds only bad things in other people, especially if they candidate for the post of President of the IBU”.

“The fact that he will represent Georgia, raises question why he is not representing his own country,” she told insidethegames.

“All my respect goes to Mr Tikhonov and his great experience and achievements in biathlon as an athlete, but what relates to his desire to lead the IBU, all the members of the IBU have expressed their attitude already several times.”

The election between Latvian politician Broka and Sweden’s IBU vice-president for development Dahlin, which has turned bitter in recent weeks, is due to be held on Friday (September 7).

The victor will replace Anders Besseberg, who stood down earlier this year after criminal prosecutors opened an investigation into the Norwegian and former secretary general Nicole Resch which focuses on possible doping, fraud and corruption.

Besseberg and Resch are suspected of accepting bribes amounting to $300,000 (£211,000/€243,000) and other benefits in return for a favourable stance towards Russia – but deny wrongdoing.

Latvian politician Broka has been forced to deny rumours of Russian interference in her campaign and accused Dahlin of personal attacks towards her after the Swede told insidethegames he was aware of the claims.

It has been suggested she will take a more lenient stance towards the Russian Biathlon Union, relegated to provisional membership following the doping scandal in the country.

She has denied the accusations.

Broka recently said the emergence of four new doping cases involving Russian athletes would not hamper the country’s bid for reinstatement, a key item on the Congress agenda.

Her comments were criticised by Sweden’s Olympic silver medallist Sebastian Samuelsson, who described her claim as “an extraordinary statement which also shows what way IBU will go if she is elected President”.

Both Broka and Dahlin have vowed to restore the reputation and image of the IBU amid the corruption scandal involving the previous leadership.

Dahlin declined to comment on the claims made by Tikhonov.