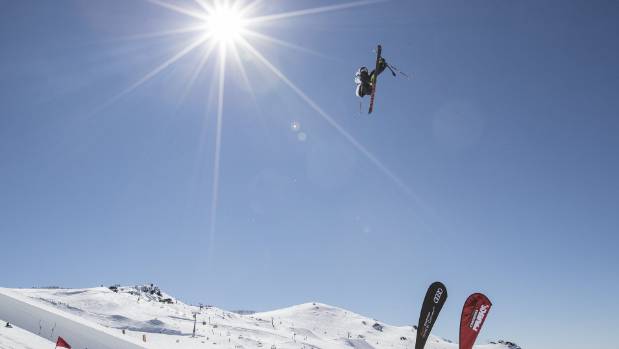 Finn Bilous from Wanaka gets way up high on his way to a bronze medal men’s Freeski Big Air World Cup event during the Winter Games NZ at Cardrona.

Wanaka’s Finn Bilous has earned his first World Cup medal, finishing in third place in the FIS Freeski Big Air at the Winter Games on Friday.

The Big Air is the first event on the 2019 World Cup calendar and is also sanctioned as an AFP Platinum level event.

It has been a week of new experiences for Bilous, 18, who landed a new trick, a switch triple rodeo 1440 in qualifying rounds on Thursday, which put him through to the finals in second place. 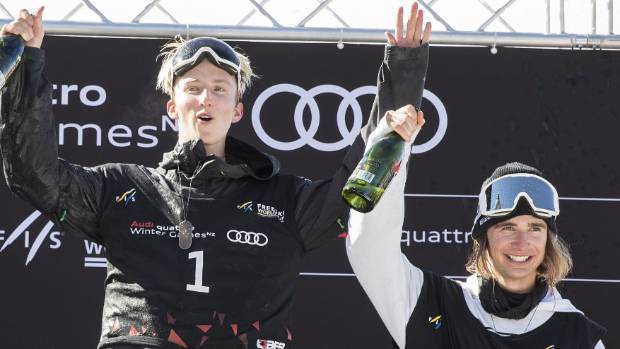 Andri Ragettli from Switzerland, left, and Finn Bilous from New Zealand, on the podium after the men’s Freeski Big Air World Cup event during the Winter Games at Cardrona on Friday. Ragettli won gold and Bilous bronze.

“We got up here, conditions were perfect and training went off. Everyone was doing crazy tricks from the get-go so you knew it was going to be a gnarly contest. It definitely lived up to those expectations. I landed a new trick both yesterday and today and those were the tricks that just got me on the podium.”

Bilous’ first jump, the switch triple rodeo 1440, was the single highest scoring tick of the day (93.6) and had him in first place at the end of run one. He went a bit too big with the forwards triple cork 1440 on run two and had to squat down on landing but cleaned it up for run three to finish in third place, claiming his first World Cup medal, just 0.2 points ahead of Norway’s Birk Ruud.

“I’m super stoked just to land the jumps, and to end up on the podium in front of the home crowd is very rewarding.”

The men’s competition was decided on the final run of three with each competitor’s top two scores combined to decide final rankings.

Ragettli crashed on the triple 16 on his first run but then pulled through with a score of 91.00 for his triple 16 truck driver on his second attempt, with everything to play for on run three. A stomped switch triple 1440 truckdriver and another score of 91.00 put him to the top of the leaderboard.

“It feels amazing, what a start to the new season,” said Ragettli. “My day started not that well, I missed my first jump, didn’t land it, but then put the second and third run down perfectly and won the event, I’m super stoked.”

Despite topping the qualifying rounds earlier in the week, Canada’s Evan McEachran wasn’t counting on landing in the medals in today’s World Cup final.

“I’m not much of a Big Air skier so I kind of surprised myself today,” said McEachran who finished in the silver medal spot, putting down a switch double 1800 tailgrab, backed up with a right triple 1660 safety grab.